Walking on a Dream

This is Why We Fight

Constance Zimmer
Alana Cahill is a physician advisor who was brought in to help Seattle Grace Mercy West Hospital avoid bankruptcy, after it had to pay some of its doctors $15 million each.

On her first day at Seattle Grace Mercy West Hospital, Dr. Cahill arrived late at the hospital. During a short staff meeting, Owen Hunt told his staff about her, saying she consults to maximize efficiency, streamline processes and assess where the hospital could trim its budgets.

When Bailey said she'd only say "who to fire, when to fire them", Owen replied she would only advise and help.

It turned out Alana wasn't late at all, but she was actually up in the ER. She wanted to test how long it would take before someone took a look at her, and when April finally approached her, she told her she'd been 45 minutes in the ER bed. ("Walking on a Dream")

After she met up with Owen, he gave her a tour around the hospital. She met Derek, and told him she'd watch his surgery the next day. While informing Owen on the waiting time in the ER, they ran into Richard Webber. Alana was one his students. At first, Richard thought she came to the hospital looking to join the staff.

They also ran into Arizona, who was trying to relax in one of the lounges. While entering the lounge, Alana told Owen she'd be looking at everything in the hospital. Alex informed her on a pediatric case, and she shared a conversation with him and Arizona. She told she'd watch her surgery the next day.

The next day, she was trying to fit in as many surgeries as possible in her schedule. Jo Wilson deliberately changed the hour of Derek's surgery on the OR board, so Cahill wouldn't be there.

During Arizona's surgery, Alana talked to Owen about the Africa program. When Arizona started to suffer from phantom limb, Dr. Cahill questioned if Arizona even should be allowed in that OR. Too busy to help Arizona, Owen revealed that Derek's surgery had started hours ago, making her leave the gallery to go observe Derek. However, he threw her out of his OR and she walked back in right at the time Owen ordered Alex to stab Arizona's prosthetic with a scalpel. Alana then figured out why Arizona had been acting so strange the past days. ("Walking on a Dream")

During a staff meeting, Alana told the doctors she was impressed by what she had seen the past three days. She especially praised the Africa program, saying it was good publicity for the hospital and that she didn't feel like cutting it. However, she did say she would have to make cuts. She surprisingly proposed to close the ER, claiming it was hemorrhaging resources. ("Walking on a Dream"’)

Alana had cameras placed all over the CCU. On the other side of the cameras is a remote physician., who is there to help reduce mistakes, improve patient care and maximize physician hours. She also made sure that the OR's were arranged with maximum efficiency, specifically for OR turnovers. Alana also demanded that the doctors' average time between surgeries, 37 minutes, would be cut in half.

She also brought in a doctor to teach the general surgeons a new technique for a hernia repair, claiming it was needed to standardize OR procedures.

She wanted to replace the ER, which was open for one more day, with something she had yet to think about. She sent workmen to measure it up, but Owen sent them off because he didn't want them to be there while the ER was still open.

Trying to save the ER, April and Derek created a whole plan to make budget cuts in every department. When they proudly presented it to Cahill, she said that the hospital couldn't be saved by making budgets cuts, but that it had to be bought. She revealed that she had to make the hospital presentable, and that the ER had to go. ("Bad Blood")

Uprising from the Staff[]

Alana Cahill managed to find a buyer for the hospital, a group of businessmen named Pegasus. After modernizing the hospital with tablets, she gave them a tour around the hospital, exactly at the time when April brought in a trauma patient. In the empty ER, which was being turned into a hernia clinic, April and several other doctors gave the patient first aid care.

When Cahill and a few members of Pegasus were about to visit the ER, Derek managed to distract them long enough so the patient could be moved to an OR. While talking to the Pegasus members about the hernia clinic, Cahill noticed some blood on the floor. It didn't take her long to figure out that someone brought in a trauma patient. She left the Pegasus members with Derek, ordering him to continue the tour. She found out that April, Meredith and Cristina were operating on the trauma patient. However, Meredith "accidentally" deleted the patient's file on the new tablets.

Cahill then decided to interrogate every doctor involved, starting with the interns. Alex and Jackson then confessed, claiming it was the right thing to do. Owen let them go unpunished, much to Alana's surprise. She paged Shepherd, telling him she knew he helped the other doctors because it was his code that accessed the medication case on the fifth floor. Cahill then reveals that if the kid had died, it would've cost the hospital a lot of money and it would have made Pegasus back out. She revealed Pegasus to be the only option left, and said that if the staff continued to undermine her, the hospital wouldn't stay open.

During all this, Callie and Richard visited another hospital that was owned by Pegasus. What they saw there didn't please them, and what the doctors there told them didn't sound good at all. Callie then proposed to the doctors who were involved in the plane crash to buy the hospital themselves. ("The Face of Change")

The Sale to Pegasus[]

Like in the other hospitals Pegasus owned, she chose a doctor to promote the hospital. Derek got appointed as face of the hospital, making brochures and giant posters with his face on them. Derek disliked them, but she refused to have them taken down because they served as promotional material for the hospital. The nurses didn't like all the changes, and they all threatened to quit. Cahill needed Owen to talk them out of it. He was successful in doing so.

While Alana and Owen were dealing with the nurses, the last thing that had to be dealt with before the hospital could be sold, the group of doctors who were in the plane crash and Callie all come to the conclusion that they should buy the hospital themselves, as Pegasus wouldn't do any good to the hospital.

However, Pegasus moved up the sale to that night, leaving them with too little time to come up with a decent plan. Therefore, they saw only one option left to postpone the sale. During the meeting, Derek, Meredith, Callie, Arizona and Cristina resigned, completely changing the value of the hospital and making Pegasus back out.

Alana was left startled and yelled at by one of the board members and Owen. She stammered she couldn't salvage the sale because there was no way she could replace these doctors and that she couldn't reposition or find new buyers. Owen told her she had to save the sale. ("Hard Bargain")

She did manage to get Pegasus back in, but their counteroffer was to buy the hospital for parts, liquidating its assets and laying off its staff. Alana informed the hospital board, having them pull together an emergency meeting to discuss it. However, like Roberta Thompson told Alana, the hospital needed an offer, and this was the only one, leaving them with no other choice.

Dr. Cahill was a student of Richard Webber, and he described her as a great student and a gifted surgeon.

However, during a surgery, Alana choked. She said that was the reason she left the OR to become a physician advisor. She told Owen she saved a dozen of hospitals before she came to Seattle.

At the end of her third day in the hospital, Richard said she was judging harshly, but Alana claimed that was part of her job. She also said that during her intern year, Richard said to her that medicine was constantly changing and that she had to be part of the change or get out. She then said that she was making changes, and that he should be proud of her.

Alana said to Owen she was very good at her job. She proved this by making Pegasus interested again in buying the hospital, after they previously backed out because Derek, Meredith, Callie, Arizona, and Cristina all resigned. 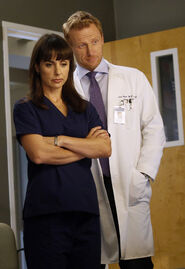 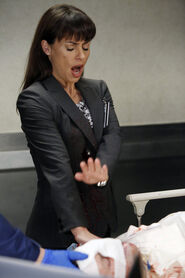 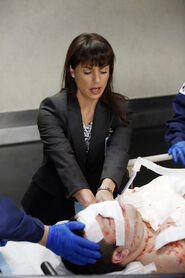 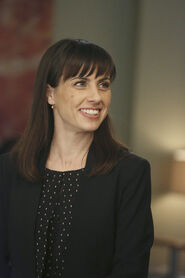 Alana: Well, I'll see you in the OR tomorrow.
Derek: Typically, you need to be invited.
Alana: If things were running typically, I wouldn't be here, now would I?