Liza Weil
Alison Clark was a friend of Izzie Stevens.

She was a cancer patient of Dr. Swender. She was a college student and had been diagnosed with cancer two years prior. She'd had several surgeries and chemotherapy. Swender then started IL-2 and after two treatments, her mets were gone. However, while she was in the hospital, she coded and had to be rushed into surgery. They looked desperately for a bowel perforation, but didn't find anything. They resected a portion of her bowel, but were unable to finish the surgery because she was too unstable. She was unable to come off the ventilator after her surgery and her parents and boyfriend were told she wouldn't wake up.

She had a boyfriend who came to see her when she had her final surgery.

Her parents came to the hospital after her surgery. They were informed that she wouldn't wake up.

While they were undergoing chemotherapy together, Alison became friends with Izzie Stevens. 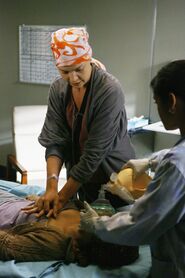