Andrew Langston came into the hospital after jumping in a vat of cement.

Andrew was dared to jump into a vat of cement at a construction site, which he did. The firefighters chipped around him, but had to bring him in with a large amount of cement still around him. The doctors carefully evaluated his condition in order to figure out where to start first. They then each argued that the injuries related to their specialty should be treated first.

They eventually started work. Mark put vinegar on his skin to minimize the burning. While they were working, Bailey assured him that more than just this one piece defines him. Callie had to do a fasciotomy to relive the pressure in his leg. They then started to remove the larger pieces of cement to get him out. Bailey figured out that they were missing something, but she couldn't figure it out. She thought about it and remembered that they'd hydrated him, but hadn't given him a way to release the urine, so they needed to place a catheter before his bladder exploded. ("Freedom, Part 1")

They finished breaking up the cement and Andrew was warned that there was a chance that when they removed the last chunk, he'd crash. But he was assured that he'd be okay because they'd rush him to the OR. They removed the final piece and he crashed. They intubated and then rushed him into surgery to fix his injuries. He had a pulmonary embolus, so Richard said to page Hahn, but Cristina said she could take care of it and he allowed her to do it. They finished his surgery successful and he was stable post-op.

Andrew woke up from surgery and Lola came to his room to visit him and kissed him. ("Freedom, Part 2")

He had a crush on Lola. He lay in the vat of cement because she was watching. He wanted to impress her. After his surgery, she came to sit by his bedside and kissed him. 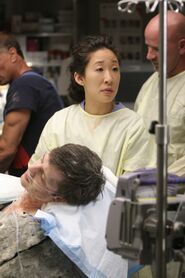 Retrieved from "https://greysanatomy.fandom.com/wiki/Andrew_Langston?oldid=270008"
Community content is available under CC-BY-SA unless otherwise noted.