Emily Rios
Angela Reilly is the daughter of Jake Reilly. She is known to be in love with her professor from university.

On Angela's birthday, Jake came to have dinner with her. She confessed to him that she'd had sex for the first time, but he didn't want to talk about it. She wanted to tell him because she was so happy. It was nice feeling like she did.

At dinner, Angela interrogated Jake about his own love life. She figured out he liked someone and he told her about Addison. Angela said her mom would have wanted him to be happy.

When Jake talked to Angela later, she said that she wanted to meet Addison at some point, though he said nothing was going to happen with them.

Angela came to visit Jake at the office, where he introduced her to Addison. ("The Letting Go")

Confrontation Between Jake and Eli[]

Angela started dating Eli, her human sexuality teacher. She introduced him to Jake when they met up at the movie theatre. Jake was surprised at the age difference.

Angela and Jake later had lunch together and Jake expressed his disapproval at their relationship. She warned him not to make her choose because he wouldn't like her choice.

Addison encouraged Jake to invite Angela and Eli over for dinner. After Jake threatened Eli during that dinner, Angela confronted Jake, saying she hoped Eli misunderstood and Jake didn't really threaten his life. She then left in anger. ("The World According to Jake")

Angela attended her father's wedding to Addison and served as his best man. When they danced at the reception, they talked about their argument and cleared the air.

Three months later, Angela came to Jake and told him she was taking a semester off from school to go to Rome with Eli while he taught there. Later, before she left, she went to Jake, who apologized for his behavior and said that he only wanted her to be happy, even with Eli. He also said that no matter what, she'd be his girl. ("In Which We Say Goodbye")

Eli is Angela's professor at her college. They first met in his human sexuality class.

Angela's father, Jake, disapproves of Eli because he is 30 years older than her. Despite the age difference, she says that she loves Eli. ("The World According to Jake")

She later decided to go to Rome with Eli for a semester while he taught there. ("In Which We Say Goodbye")

Jake is Angela's father. He adopted her after falling in love with her mother. They remain close long after her mother's death. She loves him deeply, despite the conflicts they sometimes have. 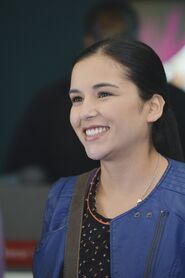 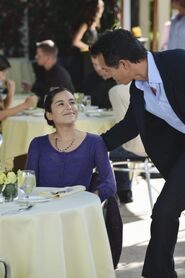