Archie Roche came into the ER with burns when a meth lab in his building exploded.

Archie came into the ER with burns after being an explosion in his building. He also had a broken arm. His burns were debrided in the the ER.

When they found out that the explosion was caused by a meth lab, the doctors asked Archie if he'd been using meth, which he said he wasn't. He was then taken into surgery to reduce his arm. He was stable and awake after his surgery.

Dave and Marla Kristler live upstairs from him. They're very close and he sometimes babysat their son, Brian. He was concerned when they were all hospitalized and disappointed when he learned that Marla and Dave had been cooking meth in their apartment. 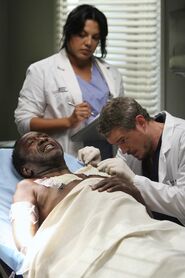 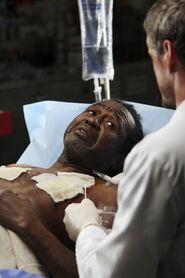 Retrieved from "https://greysanatomy.fandom.com/wiki/Archie_Roche?oldid=229963"
Community content is available under CC-BY-SA unless otherwise noted.