Begin the Begin is the thirteenth episode and mid-season premiere of the second season and the 22nd overall episode of Grey's Anatomy.

The Chief enforces the 80 hour work limit with an iron fist so Meredith has free-time, and so does Cristina, but she chooses to go to Palm Springs with Bailey for a heart retrieval while the Chief asks Derek for a favor regarding Ellis Grey. George has a teenager who is actually different while Alex treats a man who has a bezoar and Izzie works on Denny Duquette.

Ellis was shown at Roseridge Home for Extended Care. Derek came to visit her to see if she was eligible for a trial.

Burke and Cristina were seen preparing to operate together on a patient with mesothelioma.

Denny, 36, was told to come into the hospital when a heart became available for him, which he needed due to cardiomyopathy. However, the donor showed signs of coronary artery disease, so the heart was not suitable for transplant and he was sent home.

Bex, 14, was in the hospital for a biopsy on an enlargement of a pelvic lymph node. Bex was found to have elevated hormone levels which were caused by the consumption of birth control pills, but that could be controlled by oral medication. The ultrasound showed a tumor, which was compressing what they believed to be an ovary. However, further testing identified it as a testes, meaning Bex is intersex. The tumor was benign, but because of her condition, they recommended therapy for the family. Bex's parents asked Addison to remove the testicle, but she refused to do so without Bex's consent.

Malar was in the hospital to be treated for abdominal pain, caused by a bezoar. He had eaten a novel he'd written. Before his surgery, he was sweating profusely and babbling incoherently. The bezoar was removed successfully, but was diagnosed with mercury poisoning.

While attempting to retrieve a heart for Denny Duquette, Bailey saw signs of coronary artery disease, so the heart was deemed too damaged to be transplanted. 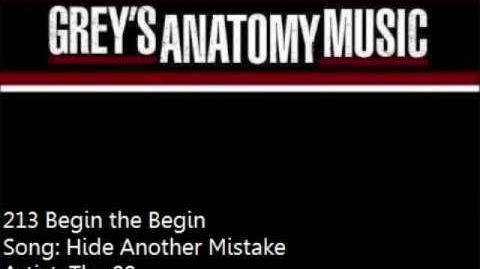 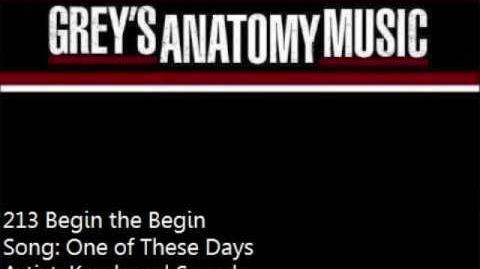 "One of These Days" - Kraak and Smaak 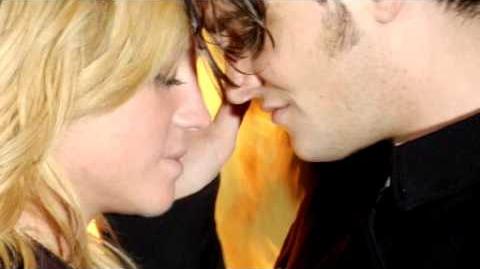 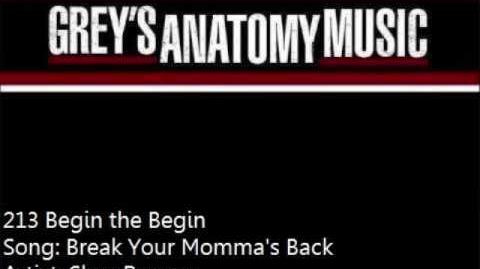 "Break Your Momma's Back" - Slow Runner

Meredith: Such a good dog! Who's Mommy's good boy? (turns and looks at Izzie and George) C'mon, what are you doing, we're gonna be late.
George: Uh— We need to talk about the dog.
Izzie: That's not a dog, it's a hyena that escaped from the zoo, dressed in dog clothing.
George: Whatever. I don't chew up his clothes. I don't urinate on his bed. I don't try to mount him from behind.
Meredith: People, he's our dog. We love our dog. He loves us.
Izzie: Mount you from behind?
George: He tries to.

Retrieved from "https://greysanatomy.fandom.com/wiki/Begin_the_Begin?oldid=289994"
Community content is available under CC-BY-SA unless otherwise noted.