Bethany Anderson is the mother of Wallace Anderson.

Bethany was at the hospital with her son, Wallace, who had short gut syndrome. She and her husband requested a meeting with a board representative and the Chief and they said they wanted her there as well. In the meeting, they revealed that they planned to donate $25 million to the hospital, half to continue research to find a cure for Wallace's condition and half to the hospital itself.

When they found out that Wallace had another bowel obstruction, Arizona Robbins advised against surgery, saying she wasn't confident he would survive. She instead encouraged them to prepare themselves and Wallace. However, they pressured her into surgery and she operated. Wallace survived the surgery, but later went into sepsis and died in a second surgery.

While they were packing Wallace's room, Arizona came to them and asked if they wanted to see Wallace. They said they did and Arizona took them to the morgue, where they viewed Wallace's body and Bethany started to do the "bad dreams" routine she'd done for Wallace while he was alive. When she was unable to continue, Arizona continued for her.

She is married to Paul Anderson.

She and her husband tried to keep their son's life as normal as possible even while he lived in the hospital. To help him sleep, she had a routine she did to banish bad dreams. When Wallace died, she was devastated. 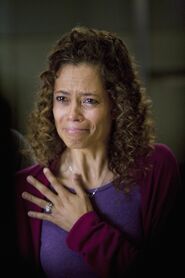 Retrieved from "https://greysanatomy.fandom.com/wiki/Bethany_Anderson?oldid=307618"
Community content is available under CC-BY-SA unless otherwise noted.