watch 01:29
Wiki Targeted (Entertainment)
Do you like this video?
Play Sound

We Didn't Start the Fire

During soccer playoffs, Betty tore her ACL. She had surgery to repair it and was given ten days' worth of opioids for the pain. She ended up addicted to them and moved on to other drugs when they ran out.

Betty got pregnant by a drug dealer and gave birth to Leo. At some point after his birth, he was put into foster care and went to live with Owen Hunt.

When Leo got his six-month well-baby checkup, Betty was told she could come and she did. While he was getting a shot, Betty stepped out of the room and talked to Amelia, who offered to buy her breakfast. While they were eating, Betty told Amelia what had happened that led to her life being how it was. In response, Amelia decided to take Betty in and help her get and stay clean. When Betty showed up to come home with her, Amelia laid out the rules for her and then they went home with Owen and Leo. ("Bad Reputation")

Amelia helped Betty get through her detox, which involved lots of vomiting. Betty was angry with Amelia and took the withdrawal out on her, which Amelia said was fine. Amelia became worried when Betty was spending a long time in the bathroom, she went to check on her and found that Betty had left out the window. ("Fight For Your Mind")

Betty came back to Owen's house. She said she'd been clean for six days and missed Leo. Amelia took her to work and kept Betty in her sight all day. Betty later confessed that she'd been too high to miss Leo and came back because she got cold, which Amelia already knew. She then took Betty to a meeting. ("Cold as Ice")

The day of Alex and Jo's wedding was the day Betty got her 30-day chip from AA. Neither of her parents came to the ceremony despite Amelia inviting them. Betty then went to the wedding with Owen and Amelia. After the wedding planner ended up having an allergic reaction to shrimp and was sent to the hospital, the wedding party and guests then boarded a ferry, where Alex and Jo were married by Meredith. ("All of Me")

After the wedding, she continued to live with Owen, Amelia, and Leo and the four of them settled into a rhythm. ("With a Wonder and a Wild Desire")

Amelia became upset and fought with Betty when she believed Betty was doing drugs and lying about it. She took Betty to work with her for a drug test, but still wasn't sure what she should do. Amelia then talked to Owen's mother about how to be a good parent to Betty. She went back to Betty, who admitted to having smoked weed. Amelia reminded her that drug addicts can't do that, because if you smoke weed, you might forget not to do heroin. ("Momma Knows Best")

After Amelia read a text from Betty's phone about her skipping class, Amelia convinced Owen to wait with her outside Betty's school to see if she would leave during the day. When they saw Betty leaving with two friends, Owen got their attention and waved, which encouraged them to go back to school. ("Everyday Angel")

Soon after, Amelia dropped Betty off at school one morning and then the school called and told her Betty hadn't come to school that day. Amelia came back to Owen's to check if Betty was there, but she wasn't, so she, Owen, and Teddy spread out to look for her, but at the end of the day, she was still missing. ("Flowers Grow Out of My Grave")

During the wind storm, Betty came into the ER with a cut on her head. She openly admitted to Amelia that she was high and said she really did want to get better. Amelia was angry with her, but came to the ER, hugged her, and told her to come back always. She also decided to become Betty's foster mom officially. ("Blowin' in the Wind")

When Richard found Betty wandering the hospital, he said that he fights cravings by helping people and invited her to help him treat patients. When she started talking about staying clean and getting her life back on track, he advised her not to think she was cured just because she was making good progress. Later, he found her searching cabinets for drugs. He told her they were kept in a locked cabinet. Amelia later talked to Betty and said she needed to be ready to accept Amelia's help and help herself and to get her to that point, Amelia found her a bed at a rehab facility. Betty agreed to have Amelia drive her there. ("Shelter from the Storm")

Running Away from Rehab[edit | edit source]

After telling Amelia the truth, Betty ran away from rehab after calling her parents to tell them where she was. ("I Walk the Line")

Betty and her boyfriend, Linus, took meth and then went to the park, where they got opioids. They both overdosed and were taken to the hospital, where they were directed to the clinic because they both seemed stable. Once she realized where she was, Betty asked Linus to get their clothes so they could leave, but then she suddenly started having chest pains. She was moved to the hospital, where they found an aortic dissection. She was rushed into surgery. After a difficult operation, Betty's parents were told she'd be okay. She was stable and awake afterward, but unaware that Linus had died while she was in surgery. ("I Want a New Drug")

Two weeks after her heart surgery, Betty prepared to leave town to go home with her parents and Leo. She refused to say goodbye to Amelia before they left. Later, they returned to give Leo back to Owen, saying Betty wanted to be a kid and be able to make mistakes and live her life, which she couldn't do if she had to be Leo's mom. ("We Didn't Start the Fire")

She became romantically involved with Linus while they were in rehab together. She confided in him that she worried that when people learned her drug dealer had gotten her pregnant at fifteen that no one would love her and he promised to love her forever. ("I Want a New Drug")

She has a son named Leo who was in foster care and later adopted by Owen Hunt.

She has friends named Rachel and Eileen, whom Amelia says seem like nice girls. ("Everyday Angel") 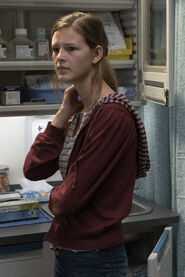 Retrieved from "https://greysanatomy.fandom.com/wiki/Betty_Nelson?oldid=336949"
Community content is available under CC-BY-SA unless otherwise noted.