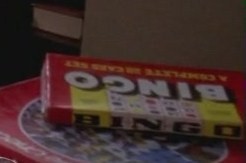 Bingo is a game of chance played with randomly drawn numbers which players match against numbers that have been pre-printed on 5x5 matrices. The matrices may be printed on paper, card stock, or electronically represented and are referred to as "cards." Many versions conclude the game when the first person to achieve a specified pattern from the drawn numbers. The winner is usually required to call out the word "Bingo!", which alerts the other players and caller of a possible "win".

When unpacking some of her and her mother's old boxes, among other things, Meredith and Derek discovered a Bingo board game.

The residents of the Brookside retirement home play bingo.

Retrieved from "https://greysanatomy.fandom.com/wiki/Bingo?oldid=167338"
Community content is available under CC-BY-SA unless otherwise noted.