Deterioration of the Fight or Flight Response

Brian is the boyfriend of Camille Travis.

Brian went to the prom with Camille Travis. During the prom, they had sex, during which Camille lost consciousness and had to be taken to the ER. He waited with her at the ER, but was told to get lost when Richard saw them. Richard went after Brian, scaring him. ("Deterioration of the Fight or Flight Response")

Brian later went to the hospital prom with Camille. They danced together until her uncle cut in to dance with her. ("Losing My Religion")

He is dating Camille Travis. They went to the prom together and had sex afterward, during which Camille lost consciousness. ("Deterioration of the Fight or Flight Response")

He later came to the hospital prom the interns organized. ("Losing My Religion") 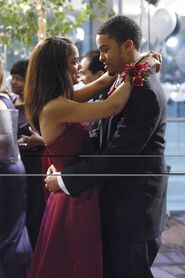 Retrieved from "https://greysanatomy.fandom.com/wiki/Brian_(Season_Two)?oldid=270103"
Community content is available under CC-BY-SA unless otherwise noted.