The Face of Change

Rachel Brosnahan
Brian Weston is a patient who was at Seattle Grace Mercy West Hospital to have his breasts removed as part of his sex reassignment.

When Brian was 14, he booked an appointment with Alex Karev to find out how old he had to be to start his sex reassignment. Alex referred him to a transgender support group, where he met Jess.

At 18, Brian came back to the hospital after saving up for the last four years to have his breasts removed. Jess came to the hospital to support him. On the other hand, Mr. Weston was highly unsupportive and felt that Brian would change his mind.

The surgery went well. Jess talked to Mr. Weston afterward and admitted that she had sent the e-mail informing him about the surgery because she believed he should know. He offered her all the money he had on him to help out with their rent, but left without speaking to Brian.

Brian is dating Jess, whom he met at a transgender support group. Jess was supportive of Brian's decision to have surgery and stayed at the hospital with him.

Brian's father was not supportive of his decision to have surgery and believed that Brian would change his mind. While speaking to Jess, Mr. Weston repeatedly misgendered his son. 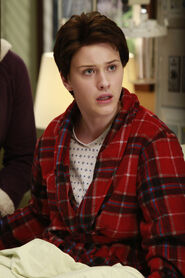