Maya and Andy try to convince a couple to evacuate

The California Wildfire is a wildfire that raged in Los Angeles.

Station 19 received word that there was a raging wildfire in Los Angeles and LAFD was requesting backup supplies. They prepared the supplies after learning the the fires were only 10% contained. ("For Whom the Bell Tolls")

The members of station 19, except Travis, then drove down to help fight the fire, which Cal Fire had been fighting for a week. When they arrived at base camp, they were sent to to structure protection on Blue Willow Lane, which was being evacuated.

They drove to that neighborhood and cleared brush, brought stray furniture indoors, covered bents, checked gutters, and closed windows. Dean saw George refusing to get on the evacuation without his cat and promised he'd find George's cat in order to get him to leave. After George was gone, Vic admonished Dean, saying the cat was probably dead already.

While clearing brush, Andy and Maya came across Terry and Maria, who were also clearing brush. They refused to leave, saying they'd never evacuated for a wildfire before.

As the fire got closer, they had to put out several small fires while they worked.

While they worked on that, Travis, Ryan, and Pruitt arrived at base camp. They jumped in to help.

The embers blocked off the only way in or out for the team, leaving them on their own. Terry, while clearing brush, got his hand stuck in a brush cutter, causing him to bleed profusely. Ben decided to amputate his hand in order to free him. They then took him into his house to continue treating him. While they were treating him, a cat walked in through their pet door, George's cat.

While they were in Maria and Terry's house, the fire crept closer and then came right outside the door.

Back at base camp, they knew the team was trapped and Dylan told Travis he knew an unmarked access road which could provide them a way out. They were able to boost the radio signal in order to get the message to 19 about the access road.

Andy and Sullivan were forced to see refuge in a pool when the flames overtook the area they are working in. They escaped through a small gap in the flames.

When Maya got the call about the access road, they all piled into the engines and drove out. On their way, the engine's tires started to melt, making it hard to steer.

Back at base camp, George's cat was returned o him and Terry was taken by an ambulance.

The station 19 firefighters returned to Seattle, where they learned the fire was 80% contained. ("Into the Wildfire") 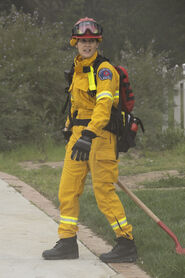 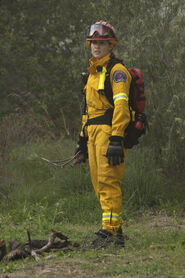 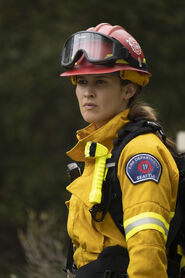 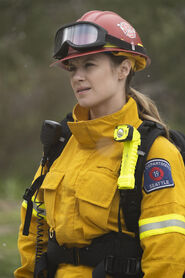 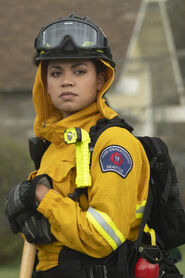 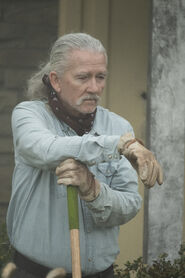 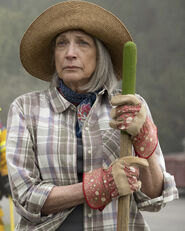 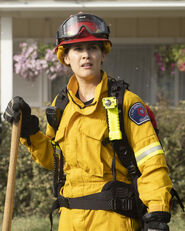