Callie and Arizona's Wedding is the wedding between Callie Torres and Arizona Robbins.

After their baby shower, Callie surprised Arizona with a weekend trip to a B&B outside Seattle. However, on their way there, they got in an argument and Callie said she'd do whatever Arizona wanted to make her happy. Arizona proposed, saying what she wanted was commitment and rings. Before Callie could answer, they ran into the back of a truck that was stopped in the road. ("This is How We Do It")

After the accident, they were taken the hospital, where the doctors worked to save the lives of Callie and her unborn baby. After the baby was born, Callie woke up and immediately accepted Arizona's proposal. ("Song Beneath the Song")

The wedding was planned and both Callie and Arizona's parents flew out ahead of the wedding for a rehearsal dinner and the wedding. However, the day before the wedding, Callie's mother expressed her disapproval over Callie marrying another woman and having a child out of wedlock and refused to come to the wedding, saying Callie wasn't a bride. Callie sent her father away with her mother, as well.

After the minister, whom they'd worked hard to find, had to back out when his wife was in an accident, Callie briefly called off the wedding. However, Bailey was able to convince her to go through with it, reminding her that whether her mother approved or not, their love and their marriage was real.

Bailey officiated the wedding and Mark walked Callie down the aisle. After the ceremony, there was a reception complete with a candy bar. When the time came for the father/daughter dance, Mark offered to dance with Callie, but their dance was interrupted when Callie's father showed up. He said he'd been dreaming of dancing with her at her wedding since she was a baby. ("White Wedding") 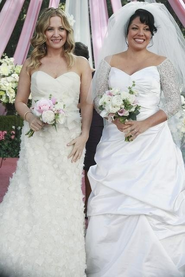 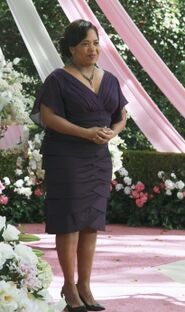 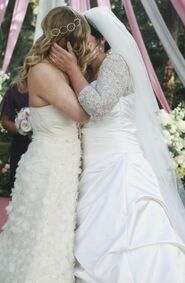 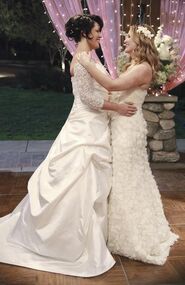