The firefighters and Jackson help victims of a bear attack

The Camping Trip is a trip planned by Maya to build team relations.

When Maya struggled with the team after being named captain, Pruitt suggested a team building day away from the station to build morale. She decided to take everyone camping. The team all reluctantly came, except Ben, who had to get the PRT ready.

As they hiked to their campsite, they met Rachel and Scott Burke, who were camping nearby.

When they arrived at their site, they put up their tents. Vic had brought Jackson along and Rigo brought Eva. Maya announced they would be building a fire using team work. After the fire was started, the team laughed around it while Maya watched from a distance. Maya tried to start another team building exercise, but the exercise came to a quick end when Andy threw the pinecone they were using into the fire.

As they settled in for the night, they heard yelling. They followed the noise to Rachel and Scott, who had been attacked by a bear. Rachel had a severed artery in her arm while Scott's nose had been ripped off. They started looking for the nose so it could be reattached. After Rachel and Scott were taken out of the woods, they found the nose. Maya tried to run it out to them, but they had already left, so the rest of the team packed up and they drove the nose to the hospital, where Maya took the nose in to be reattached. 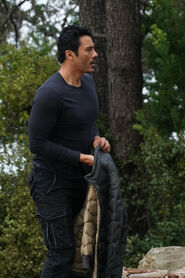 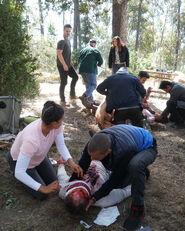 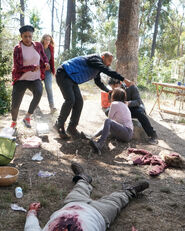