Start a Wiki
watch 02:21
Grey's Anatomy Profile: Carina DeLuca
Do you like this video?

Break Down the House

Carina DeLuca is an OB/GYN attending and Andrew DeLuca's sister who's currently researching the female orgasm at Grey Sloan Memorial Hospital and the ex-girlfriend of Arizona Robbins.

While her mother moved to the United States with her little brother, Carina stayed in Italy with their father.[1]

After he and Sam Bello broke up the first time, Andrew spent three weeks on her couch. ("Who Lives, Who Dies, Who Tells Your Story")

When Carina learned that her brother was working for a female Chief of Surgery, she came to Seattle to meet with Miranda Bailey about doing her research at Grey Sloan Memorial. She talked with Bailey and got permission to use the hospital's MRI to take pictures of women's brains before, during, and after orgasm.

Amelia offered to participate in the study and her MRI showed a brain tumor. ("Get Off on the Pain")

When Carina learned that Arizona had a patient who was having a difficult, slow labor and couldn't use any medical means to hasten her labor, she suggested clitoral stimulation to provide natural pain relief and speed up her labor. Despite her initial reservations, Arizona suggested it to her patient and with her husband's assistance, labor quickly progressed. ("Go Big or Go Home")

As they were bonding over strange objects they have pulled from people's bodies, Richard invited her to the intern mixer and she happily accepted the invitation. At the mixer, she got acquainted with Owen, who mistook her for an intern. She clarified she was a visiting doctor and that her specialty was orgasms. This sparked his interest and after some flirting, they ended up kissing in a hallway. ("Come on Down to My Boat, Baby")

Peggy and her wife came into the hospital when Peggy panicked during their planned home birth. When the power went out for a moment, Peggy panicked again and tried to leave for another hospital, but Arizona determined that her baby's head was already out and then coached her as Carina delivered the baby in the hallway. ("Out of Nowhere")

After a conversation with Carina about maternal mortality, Arizona was inspired to look into it and learned that the US has a much higher rate of death for new mothers than Italy. She wanted to study why this happened and how they could prevent it. After writing a proposal, Arizona went to Carina and asked if they could work together. In addition to that, they rekindled their romance. ("Harder, Better, Faster, Stronger")

Carina went to Kate Lachman to get access to the patient files, but due to a misunderstanding, Kate declined. When Arizona stepped in, she gave them access. The research showed a climbing rate of c-sections, starting when Kate started working at the hospital. She encouraged Arizona to tell Kate about it, which Arizona did, offending Kate. ("Games People Play")

Their research continued and Carina believed it was making Arizona more paranoid when she demanded every possible tool they need be nearby when Lanie was delivering her baby, despite a lack of complications. After the baby was born, Carina told Arizona that everything had gone well, but when another new mother suddenly hemorrhaged, Arizona used a cart she'd had Levi put together and then modified to suit her needs to rush to her aid. They were able to save her life and stop the bleeding quickly. Arizona told Carina she thought their research was done. The solution was the cart, which was stocked with everything they could possibly need. ("Beautiful Dreamer")

When the time came for Arizona and Carina to present their research for consideration, she was paged away for a laboring patient and wished Arizona luck. After hearing that Arizona had accidentally distributed and consumed weed cookies, Carina offered her a ride home. ("Judgment Day")

Getting Andrew Off the CouchEdit

When Meredith went to Arizona to try to get Andrew off her couch, where he'd spent a whole week, Arizona referred her to Carina, who had admitted to Arizona that she doesn't believe in coddling children and believed Arizona was coddling Sofia. Carina came over to Meredith's house and got Andrew up off the couch and back to work. ("Bad Reputation")

On the day of Alex and Jo's wedding, Carina was part of the group that went to the wrong wedding. When they realized what had happened, they all rushed to get on a ferry out to Bainbridge Island. When Taryn got drunk and said she was going to confess her love to Meredith, Carina stopped her, saying love's too precious to waste it on someone who can't love you back. After the wedding planner ended up having an allergic reaction to shrimp and was sent to the hospital, the wedding party and guests then boarded a ferry, where Alex and Jo were married by Meredith. ("All of Me")

When Barry Clemens came into the ER with something stuck in his rectum, Richard paged Carina for her help in determining what the object was. With her help, they got Barry to confess on his way to surgery that he had put his wife's "hair stuff" up there. After Barry died in surgery, Richard asked for her help explaining it to his wife. ("With a Wonder and a Wild Desire")

Carina told Andrew she'd probably have to leave town and go back to Italy for a bit because there were problems with their papa. ("Momma Knows Best")

Carina came back to Seattle after several months. She came to Andrew's place and revealed that she'd brought their father back with her. ("We Didn't Start the Fire")

When her father pitched his research, which involved creating a gestational sac to allow premature babies to continue to live outside the uterus, Carina was reluctant to support it because of her father's untreated mental health issues. She went to Alex with her concerns, but Vincenzo's project was funded anyway. ("Blood and Water")

Carina continued to watch her father while he worked on his project. When one of the lambs died, she wanted him to stop his research, but he said she didn't know what she was talking about and dismissed her concerns. When he learned she was working on a patient who was going to lose her baby because she needed a hysterectomy and the fetus was not yet viable, he went around Carina and talked to the parents about using his gestational sac. The parents wanted to try it, but they were quickly told that it wasn't available for use yet. Instead, Carina delivered the baby and then Teddy removed her uterus. The baby was then wrapped in a blanket and given to her father, who held her while she died. Because of what he'd done, Alex decided to cut funding to Vincenzo's research, which upset him. ("And Dream of Sheep")

When Teddy started having pains, she saw Carina, who diagnosed cervical insufficiency and put her in Trendelenburg. ("Add It Up")

When Teddy went into labor, Carina came and attended her birth. ("Jump Into the Fog")

When Bailey started bleeding while she was at work, she went to Carina, who did an ultrasound that showed she'd lost the pregnancy. She told Bailey she just had to wait. When Ben arrived, Carina left them alone together after telling Ben she was sorry. Later that day, she did an ultrasound on Amelia, who hadn't gotten one because she was worried that what happened with Christopher would happen again. Carina assured her that everything was fine, but told her she wasn't twenty weeks pregnant as she believed, but twenty-four, injecting doubt as to the paternity. ("Let's All Go to the Bar")

Soon after arriving in Seattle, she met Arizona Robbins at a bar. She ended up going home with Arizona and the two had sex. ("Break Down the House")

Even after Andrew came home and interrupted the events, they continued. The next day, when Arizona found out that Carina was at the hospital doing research, she went to see her and Carina continued her flirting. ("Get Off on the Pain")

Arizona described the sex the two of them had as pain-relieving. ("Go Big or Go Home")

After learning that Sofia was coming back home, Arizona inadvertently broke things off with Carina. ("Come on Down to My Boat, Baby")

After not seeing Arizona for a few days, Carina asked her if she was okay. Arizona said she'd taken a few days off after Karin Taylor's death. Arizona was shocked to learn Carina had never lost a mom, while Carina was shocked to learn Arizona had lost more than one. That inspired Arizona to look into it as a surgical project and once she had written up a proposal, she asked Carina to work on it with her, a decision they sealed with a kiss. ("Harder, Better, Faster, Stronger")

When Arizona decided she needed to move herself and Sofia back to New York, she ended things with Carina. ("Fight For Your Mind")

After things ended with Arizona, she met Owen at the new intern mixer. They flirted and then started kissing at the hospital. ("Come on Down to My Boat, Baby")

Things progressed from there to her making breakfast naked with him. ("Who Lives, Who Dies, Who Tells Your Story")

After their tryst, things were awkward between them around the hospital. ("Harder, Better, Faster, Stronger")

She is Andrew's older sister. When he moved to the United States with their mother, she stayed behind in Italy with their father.

When their mom went to Italy to visit Carina, she called Andrew to say their mom was sick and he needed to come immediately. When he arrived, he learned his mom had died before Carina even called, but she explained that she couldn't stand the thought of him knowing their mom was dead without her being there to hug him. ("Momma Knows Best")

She cares very deeply about her brother, despite feeling he's an idiot. When she learned that his ex-girlfriend, Sam, was working at the hospital and he'd had sex with her, she reminded him of the time he spent three weeks on her couch because of Sam. ("Who Lives, Who Dies, Who Tells Your Story")

When ICE came for Sam at the hospital, Andrew went to Carina and ask if she had called them. She denied it, saying she wouldn't do that to Sam or to Andrew. ("Beautiful Dreamer")

Because of what happened with their mother, Andrew was worried when Carina said their papa was having problems. She assured Andrew that he wasn't dead. ("Momma Knows Best")

Carina is an attending OB/GYN who is doing research on what happens to the female brain before, during, and after orgasm. She was interested in the pain-control aspect, but in order to get funding, she used the drug companies' interest in developing a female viagra.

She was officially granted privileges when OB/GYN was short-staffed and Arizona needed another OB so they would stop paging her for regular deliveries. ("Out of Nowhere") 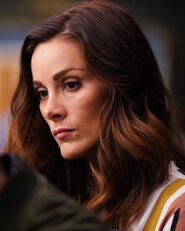 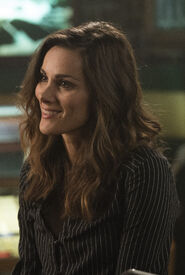 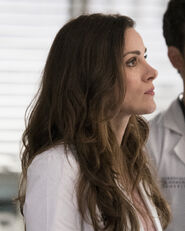 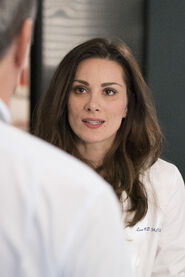 Retrieved from "https://greysanatomy.fandom.com/wiki/Carina_DeLuca?oldid=299598"
Community content is available under CC-BY-SA unless otherwise noted.