Carly Davis is Jo's therapist who came into the hospital with carbon monoxide poisoning.

While Jo was in residential treatment, Carly was one of her therapists. She did EMDR with Jo, who wasn't convinced it would be helpful. Despite this, Jo went through with the first session. That night, Jo tried to sneak out of the facility, but was stopped by Carly, who was waiting for her. She said the therapists rotate every night waiting for runners. Later, when Jo admitted in therapy that she was angry, she was also upset because she felt that it made her like Paul. Carly said she wasn't like Paul because she was able to feel the anger, but control her behavior. They then threw toys at the wall to release the anger.

Carly came into the Grey Sloan ER with carbon monoxide in what they believed to be an attempted suicide. She was taken to the hyperbaric chamber to treat her. The chamber worked and her CO level came down, but she was still unconscious. When she had a seizure, they thought she must be diabetic and her sugar had crashed. They gave her D50 and she regained consciousness. After her therapy was complete, she was moved to a room. Jo told her that she would have to call psych to report the suicide attempt. Carly corrected that it wasn't a suicide attempt. Her carbon monoxide detector had a dead battery she'd ignored and she was just curled up with a cook and her heater and the next thing she knew, she was in the chamber. Jo then took herself off Carly's case, which Carly noted was her putting up a healthy boundary.

She is a psychiatrist at the Mercer Island Treatment Center. She also used to be an on-call social worker for Safe Haven. 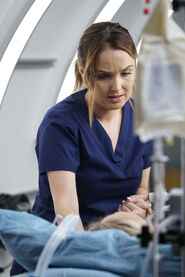 Retrieved from "https://greysanatomy.fandom.com/wiki/Carly_Davis?oldid=293024"
Community content is available under CC-BY-SA unless otherwise noted.