The Other Side of This Life, Part 1

The Other Side of This Life, Part 2

Carol is a woman who tried to have a baby with a surrogate.

Lisa was chosen by Carol and Rick, who were married at the time, to be their surrogate. However, the week she was inseminated, she had sex with Rick, Doug (Carol's current husband), and her own husband, Jim, meaning that any of them could be the father of the baby.

Right after having sex, she left town, meaning she hadn't had any prenatal care. Addison Forbes Montgomery brought her in for an examination. She did an ultrasound and an amniocentesis. The ultrasound showed placenta accreta. The tests also determined that despite Lisa being implanted with an embryo made of Carol's egg and Rick's sperm, the baby had no genetic ties to Carol.

They held a meeting with all the people involved and told them the situation. Lisa asked if that meant that she could keep the baby and she was told that legally, she could. She was also told that she would be taken in for a c-section if she went into labor. Lisa said she wanted Addison to take over her medical care. ("The Other Side of This Life, Part 1")

Lisa later came into the practice in pain. Her water broke and she was rushed to the hospital. Addison planned to do a c-section, but in the OR, Lisa started crowning. Addison warned her not to push as the cord was wrapped around the baby's neck. The baby was quickly delivered. Addison said she should be able to deliver the placenta easily, but Lisa hemorrhaged from a uterine rupture, likely due to her placenta accreta. Addison had her sedated and she repaired the damage.

Addison was able to stop the bleeding and Lisa and the baby were both stable, so went to deliver the news to the group, but they were more concerned with which of them was the father. Because of their reaction, Addison ordered that none of them could go near Lisa or the baby.

Carol was married to Rick, but they divorced and she married Doug. Before they divorced, Rick and Carol used Lisa as a surrogate to have a baby.

Lisa gave birth to a healthy baby girl. She decided to turn the baby over to Carol on the condition that they'd all be a part of her life, giving the baby two moms and three dads. 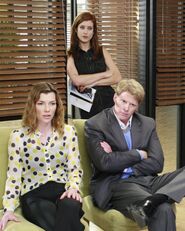 Retrieved from "https://greysanatomy.fandom.com/wiki/Carol?oldid=270263"
Community content is available under CC-BY-SA unless otherwise noted.