watch 01:29
Wiki Targeted (Entertainment)
Do you like this video?
Play Sound

Every year, the five nominees receive a call to inform them about their nomination on the same Friday of the same month at 8 am East Coast time (5 am in Seattle).

The Harper Avery Award is completely detached from the Harper Avery Foundation, so members of the Foundation have no say in who will win the award, nor do they have more information about who will be elected as the winner.

In 2018, it was revealed that Harper Avery sexually assaulted several women. To keep the award and the foundation alive, Jackson and Meredith suggested dissolving the Harper Avery Foundation and creating the Catherine Fox Foundation in its place. The name of the award was also changed.

Note: All winners listed here won when the award was still named the Harper Avery 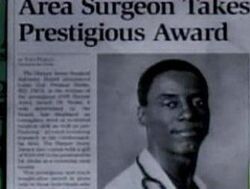 Note: All nominees listed here were nominated when the award was still named the Harper Avery

Retrieved from "https://greysanatomy.fandom.com/wiki/Catherine_Fox_Award?oldid=316567"
Community content is available under CC-BY-SA unless otherwise noted.