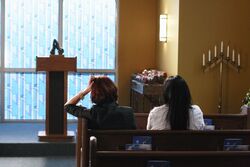 A Chapel is a small religious place of fellowship, prayer and worship. Both Seattle Grace Hospital (and the hospitals later established in the building) and St. Ambrose Hospital have a chapel.

In Before and After, Addison came to pray for her brother, Archer, but did not know how. Callie decided to help by praying beside her (looking for guidance with Arizona and their kiss).

When Izzie was admitted to the hospital as a patient, Callie went to the chapel with Arizona to pray for Izzie, feeling guilty for all the days she had wished her dead.

Jackson joined April in the chapel and told her he was willing to go to church with her and their children, as long as they could get waffles after. ("We Are Never Ever Getting Back Together")

Amelia, Bailey, Jo, Stephanie, Owen, Alex, Richard, and Arizona lit candles for Samuel Norbert Avery, along with several others. Jackson also went there to ask God to show up for April. ("All I Could Do Was Cry")

Richard and Catherine got married in the chapel in front of their friends. After the wedding, April stayed behind to cry about Jackson's ultimatum, with Arizona comforting her. ("You're My Home")

Retrieved from "https://greysanatomy.fandom.com/wiki/Chapel?oldid=255411"
Community content is available under CC-BY-SA unless otherwise noted.