Who Lives, Who Dies, Who Tells Your Story

Jackie Chung
Cleo Kim is a patient who came into the ER after the roller coaster she was on derailed.

While at an amusement park with her friends, Cleo rode a roller coaster with Gregory Williams. The roller coaster derailed and the car they were in crashed into the ground. Since Greg had serious crush injuries, the whole car was transported to the hospital so they could be carefully extracted from the car. In the ER, firefighters removed Greg's harness, which left him struggling to breathe. His neck had been fractured, so he was put in traction to stabilize his neck then removed. Once he was out of the car, they noticed that Cleo had a puncture wound to her side that was bleeding heavily. They transfused blood and rushed her into surgery, where her abdomen was repaired.

She is friends with fellow residents, Gregory Williams and Liza Simmons. When Greg said they had to do more than just work all the same, they went to a carnival together, which ended poorly when the roller coaster derailed.

She is a second-year surgical resident at Seattle Presbyterian Hospital. 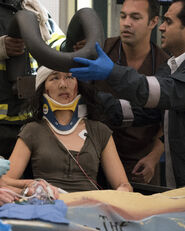 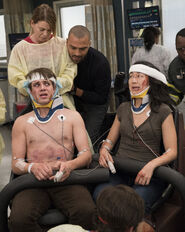 Retrieved from "https://greysanatomy.fandom.com/wiki/Cleo_Kim?oldid=301409"
Community content is available under CC-BY-SA unless otherwise noted.