Meeting Abigail, Her Illness, and Being WidowedEdit

Cormac was at a surgical conference where Abigail, a representative from a drug company who handing out pens, caught his eye as he entered the hotel. Later, she joined him at the bar and offered him a pen. He informed her that the pen was advertising an erectile dysfunction drug, explaining why none of the men wanted to take them. She hadn't known because she was an artist who only took the job for money. He invited her for a drink and took the rest of her pens from her so she'd agree. They ended up getting married and having two children.

When Abigail was 33, she developed fibroids in her uterus. She went in for a minimally-invasive hysterectomy, but it turned out one of the fibroids was actually a cancerous tumor and the machine used to make the hysterectomy minimally-invasive spread the cancer around her body. She underwent treatment, including two clinical trials, but they were unsuccessful. When she reached the point where she knew she was going to die, she talked to Cormac about her wishes for their children and told him it was okay for him to fall in love again. Shortly afterward, she died. ("Love of My Life")

Cormac started his new job at Grey Sloan Memorial. He went to round on his first patient, Jamie Caldwell, and found that they'd already started. He asked that they wait for him in the future before rounding on his patients. He butted heads with Meredith Grey when he insisted on examining her himself and came to the same conclusion Meredith had. They ordered a CT, which showed a mass in her back between two ribs. Meredith believed it was a gallstone that had escaped during a previous surgery, but Cormac thought it might be a malignant mass. Meredith didn't want to mention a possible malignancy to Jamie and her mother, but Cormac insisted on telling them. They did a biopsy, which showed that the mass was not malignant. Meredith decided to remove the mass to see what it was. Cormac tried to object, but Meredith said it was her house and he was just a guest. The mass turned out to be exactly what Meredith predicted, impressing Cormac. He later saw her when he was leaving the hospital and told her that while he understood it was her house, someone had given him a key, so they needed to learn to live together. He explained that he told Jamie and her mother about the possible malignancy because his wife's doctors weren't transparent with him when she was dying. After he left, Meredith got a text from Cristina saying that Cormac was the package she had sent. ("Let's All Go to the Bar")

When Jo brought in the baby who had been surrendered at Station 19, Cormac examined him. He said everything was good, except a minor rash which was nothing to worry about. Then he told Jo he's surprised she brought him in as he probably would have kept the baby himself, unaware that Jo had taken the baby home for several hours before bringing him to the hospital. He told Jo of his own sons, saying he believed he missed their best stage because he was a resident when his sons were babies. ("Help Me Through the Night")

Cormac was on the case when Kai Hale came into the ER with shortness of breath and coughing up blood. After seeing the CT, Cormac knew Kai had been vaping, which had destroyed his lungs and caused the bleeding in his esophagus. Cormac wanted to stop the bleeding and remove part of Kai's lung, but Meredith wanted to use coiling to stop the bleeding so they wouldn't have to remove part of his lung. Cormac agreed to let Meredith try her way, but it failed and they had to remove part of his lung anyway. Cormac said he wouldn't gloat, unlike Cristina, who had been the one on his side the first time he saw a case like that. ("A Hard Pill to Swallow")

Bringing His Sons to WorkEdit

Cormac brought his sons to the hospital on a day when there was no school due to parent-teacher conferences. They were reluctant to be shown around and then when the time came for them to go to their conference, he had trouble finding them. ("Save the Last Dance for Me")

When Joey Phillips resisted doing his physical therapy, Cormac brought him video games, hoping to encourage him to do his exercises. Joey said he couldn't, not without knowing that his siblings were safe. Bailey arranged to have the three of them come over to the hospital for a while to have pizza and play video games together. ("A Diagnosis")

During a blizzard, Cormac became enraged when a liver became available for his patient, Elisa Tang, but couldn't be transported to the hospital due to the weather. He was grateful when Andrew offered to go on foot to retrieve the liver. While Andrew was gone, Cormac continued to monitor Elisa. When she started hemorrhaging, he and Meredith took Elisa into surgery to place a shunt to stop her bleeding. While they were in surgery, Cormac took the time to get to know Meredith and the two of them bonded over being widowed. When the liver arrived, they transplanted it into Elisa, who immediately started to improve. After her surgery was done, Cormac and Meredith told her parents she'd be okay. That evening, as he left the hospital, Cormac ran into Meredith and told her it was nice to talk to someone who understood what it was like to lose a spouse so young. He then confessed that Cristina did talk about a twisted sister and asked Meredith if that was her. Meredith just shrugged. ("Snowblind")

Cormac went to the Surgical Innovation Conference in Los Angeles upon Bailey's request. He was uncomfortable at the conference, as it reminded him of meeting his wife at a previous conference at the same hotel. When Dane Pinetti tried to pitch to Cormac and Teddy, Cormac revealed that he already knew how one of his machines worked, as it had killed his wife by spreading an isolated cancerous tumor throughout her body. He refused to hear anything more from Dane. ("Love of My Life")

He was married until his wife, Abigail Hayes died. He says that before she died, the doctors weren't transparent with him, which is why he tells families everything he knows. It is clear he loved Abigail very dearly because he developed a deep hatred for Wilkes and Boon, a company that created a medical device that resulted in her uterine cancer spreading throughout her body and ultimately killing her, to the point he threatened to kill a sales representative from that company when they wanted to partner with Grey Sloan.

He has two sons, Liam and Austin, who are both teenagers.

His father-in-law used to make him watch American football, which he never understood. ("Give a Little Bit")

He knows Cristina Yang. She is responsible for him coming to work at Grey Sloan Memorial Hospital.

He is the Head of Pediatric Surgery at Grey Sloan Memorial Hospital. Before taking the job there, he used to work at Klausman Institute for Medical Research. 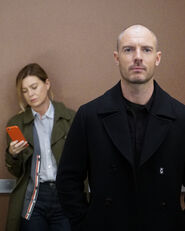 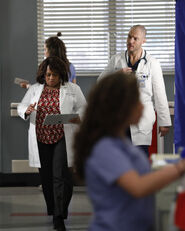 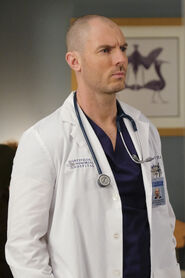 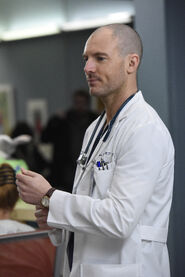 Retrieved from "https://greysanatomy.fandom.com/wiki/Cormac_Hayes?oldid=308358"
Community content is available under CC-BY-SA unless otherwise noted.