Darren Parker is the Head of Cardiothoracic Surgery at the Mayo Clinic and was Cristina's boss until she returned to Seattle.

Darren is the head of cardiothoracic surgery at the Mayo Clinic in Rochester, Minnesota. When operating, if someone comes in to speak to him, he and his team stop while the conversation is in progress, because he feels that talking while in surgery leads to errors. ("Going, Going, Gone")

When Cristina arrived at the Mayo Clinic, Darren pushed her to spend time with Dr. Thomas, to observe his technique and "babysit the old man" for a while. When he didn't feel that Cristina was getting along well there, he ordered her to take time off to explore Rochester. ("Going, Going, Gone")

After figuring out that she faked her exploration of Rochester, instead going online to see the highlights, he still reinstated her, but insisted that she continue to work with Dr. Thomas. ("Love the One You're With")

When he found out that Dr. Thomas was planning to do an outdated surgical technique on a patient that would take 17 hours, he was happy, which raised Cristina's suspicion. When pressed, he admitted to her that they couldn't fire Dr. Thomas, but they could force him to retire, which is what they were attempting to do. He was upset when he believed that Cristina had told Dr. Thomas about their plan. However, he then realized that him making a mistake might make it easier to proceed with his dismissal. After the surgery was completed successfully, he asked her to go with him, but she said she had plans already, with Dr. Thomas. ("I Saw Her Standing There")

When Dr. Parker came to Cristina to offer her a place on a surgery, she turned him down. When Dr. Parker found out what she would be working on, he tried to reassign the case. He said there was nothing to be gained from working with Dr. Thomas, but Cristina countered that there was. He tried to put Dr. Thomas on probation, but they proceeded with the case anyway and Dr. Thomas died in surgery. After surgery, he tried to speak to Cristina, but she brushed past him and left. ("Beautiful Doom")

He had a sexual relationship with Cristina until she returned to Seattle.

He and Dr. Thomas were colleagues, but they did not get along well. When Dr. Thomas died, he was in surgery after being banned from the OR by Dr. Parker.

He is the Head of Cardiothoracic Surgery at Mayo Clinic. 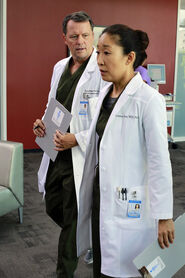 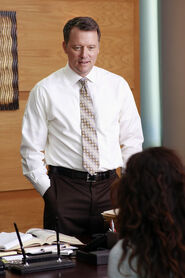 Retrieved from "https://greysanatomy.fandom.com/wiki/Darren_Parker?oldid=269857"
Community content is available under CC-BY-SA unless otherwise noted.