David Fisher is the father of Liam Fisher.

David's son, Liam, had a persistent headache and fatigue. Despite this, his parents didn't seek medical care because their religion prohibits medical intervention. David and Marie were called to the hospital when Liam showed up there and was diagnosed with a brain tumor. They explained their beliefs and signed him out against medical advice to take him home.

Later, Liam returned to the hospital. By the time his parents got to the hospital, Liam was already having the surgery. David threatened to sue, but Bailey stood by her doctors and said if they hadn't operated, they'd be having a different conversation because Liam would have died. While filling out the paperwork to get Liam out of the hospital, he argued with Stephanie, who told him he wasn't doing his job as a parent. He told her she was going to burn in hell, so she threw a tablet at a wall by his head. David and Marie later prayed by Liam's bedside as he recovered from his surgery, which was successful.

He is married to Marie Fisher.

He didn't seek medical care for his son, Liam, because of his religious beliefs. However, his wife helped Liam get to the hospital for care without David's knowledge. 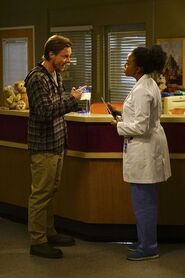 Retrieved from "https://greysanatomy.fandom.com/wiki/David_Fisher?oldid=240528"
Community content is available under CC-BY-SA unless otherwise noted.