David Young was a patient who had a face transplant.

Twelve years ago, David was hit by a drunk driver and lost the majority of his face. He'd had nine surgeries, but none had brought back full form or function. The loss of his face led him to seek out Mark Sloan, as Mark was a world-renowned plastic surgeon, to do a face transplant on him.

David met friends online, therefore they knew nothing of his accident or his face, though he invited them to come and take care of him after he learned that he needed people to care for him after his surgery, otherwise hospital protocol would not allow Mark to perform the transplant. When his friends showed up before his surgery, because they decided to take an earlier flight, he drove them off and yelled at them to get out of his room, turning the injured half of his face away from them. The doctors convinced him to let them come back, mostly because Mark told him that he would not be able to undergo a major surgery such as a facial transplant without people to care for him after he came out of surgery. He explained to his friends that he didn't want them to see him like this, because he thought himself ugly, but one of his friends, Shayna, gently kissed the top of his forehead and said to him, "Do not call my dear friend ugly," establishing that she wanted to be his friend, no matter what he looked like.

His surgery went well and afterward, they were able to get a sneak preview of it. Even though there was swelling, he was pleased with the outcome.

David, Shayna, Milo, and Dexter all met on a message board for orchid lovers. When David was in the hospital for a face transplant, the others came to be with him. He initially refused to see them because he didn't want them to see his face pre-transplant, but he ultimately let them come in and they didn't see him as ugly. 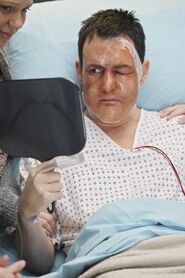 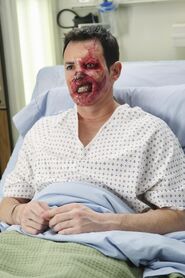 Retrieved from "https://greysanatomy.fandom.com/wiki/David_Young?oldid=258766"
Community content is available under CC-BY-SA unless otherwise noted.