Meredith treats a biker from the race

Winning a Battle, Losing the War

The Dead Baby Bike Race is an annual race down a hill in Seattle.

Every year, The Dead Baby Bar hosts a bike race. The winner of the race gets free shots of tequila. The hospital prepares for this event every year, knowing it will bring in numerous traumas.

Victims, both participants and bystanders, start coming in shortly after the race begins. Viper came into the ER with bicycle spokes in his abdomen. Alex, believing that the wounds were superficial, pulled out the spokes and told Meredith to stitch him up and discharge him. Meredith, believing it was more serious, asked Viper to sign an AMA form before letting him leave.

Viper returned the next day with his abdomen wide open. Meredith jumped on top of him to keep the wound closed as they rushed him to the OR. He had surgery to close his abdomen.

Kevin Davidson swerved to avoid a biker in the race and ended up in the ER with a head injury. His pupils were fixed and dilated, so they waited the six hours before declaring him brain dead and requesting consent from his wife to donate his organs. 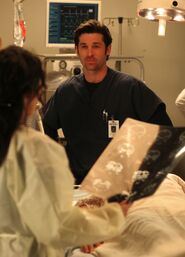