Denny Duquette was a heart patient and love interest of Izzie Stevens. He died of a stroke following a heart transplant. Later, he appeared to Meredith as a ghost type figure when she nearly drowned and again to Izzie when she had cancer.

Denny had been a patient of Preston Burke for a long time. He had been diagnosed with viral cardiomyopathy, which caused his heart to fail. He came into the hospital when a transplant became available for him and it's during this hospitalization that he met Izzie Stevens. The two of them flirted, but she ultimately had to break the news to him that he wasn't getting the heart, so he was discharged and left. ("Begin the Begin")

He came back into the hospital later in heart failure. They stabilized him in the ER and then admitted him. He was later tachycardic, but alert. In order to slow his heart rate, they had to shock his heart, which was excruciating for him. After he was stable, he got to know Izzie better. ("What Have I Done to Deserve This?")

While hospitalized, Denny experienced shortness of breath and chest pains. His heart failure was getting worse despite medication. He later had flash pulmonary edema, so he was put on Bi-pap, but Burke said that he needed more. In order to extend the time he could wait for a heart transplant, he wanted to insert an LVAD. When he heard he wouldn't be able to leave the hospital after getting the LVAD, Denny said he needed to think about it. After speaking to Izzie about it, he decided to have the LVAD implanted. ("Band-Aid Covers the Bullet Hole")

Life on the LVAD[]

While on the LVAD, Denny started experiencing shortness of breath. He had a pulmonary embolism. They tried to use a catheter to clear it, but they couldn't, so they had to open his chest. They were able to relieve the clot and he was stable after surgery. ("Superstition")

Denny then started looking into a portable LVAD, which would allow him to get up and out of bed. Izzie opposed the idea, which caused Denny to be hesitant about it. Despite this, he went ahead with it, but he was having trouble breathing while on it. They had to intubate him, which stabilized him. They thought the tubing in his LVAD had gotten kinked. He was stable and able to get up and walk around after they fixed the problem. ("Blues for Sister Someone")

While walking around the hospital with his portable LVAD, Denny collapsed and fell in the hallway after trying to use the stairs. His LVAD battery was nearly dead, so they took him back to his room. He was upset with being confined to the hospital and said he wanted to go home. Izzie tried to get his spirits back up with chocolate and tabloids, but he told her to stop, saying he hated being weak. He said if she knew what it was like, she would have let him die. ("Damage Case")

When a heart became available for Denny at Mercy West Medical Center, he was prepped for the surgery. He decided before the surgery to sign a DNR, saying that he was done if he didn't get the heart.

When the donor flatlined, Burke tried to get the other donor's heart for Denny. In order to help his case, Izzie lied on the phone and said that Denny was getting worse. However, when they asked for labs to confirm, she realized she had to make his heart actually worse in order to fool them. She decided to cut his LVAD wire. Denny tried to stop her, but he relented when she started crying and said that she would never forgive him for making her love him if he died. ("17 Seconds")

After cutting his LVAD wire, Izzie manually pumped his heart. When she found out Burke had been shot and wasn't coming, George took over pumping and the interns decided that they'd have to get the tests results themselves. Cristina looked at his heart. At this point, Denny woke back up and proposed to Izzie before coding. They used adenosine to stabilize him. At this point, Bailey came looking for them and found out what they were doing. She took over treatment and then consulted with Richard to figure out what they should do about the heart. They submitted the labs and had the heart brought over for transplant as instructed by UNOS. Because Burke had been shot, Erica Hahn was brought in to perform the transplant. She placed the heart and attempted to get it started. ("Deterioration of the Fight or Flight Response")

The heart eventually started to beat and they closed. After surgery, he marveled at having warm hands and a regular heart beat. He was stable in his room, but later that night, he threw a clot off his incision and died of a stroke. ("Losing My Religion")

After his death, Izzie struggled to figure out what to do with the money he'd left her. She used about $300,000 of it to pay for Heather Douglas to have surgery. ("Six Days, Part 2")

She then decided to use the rest of the money to fund the free clinic that Miranda Bailey wanted to open. ("Great Expectations")

When Meredith drowned in Elliott Bay, she woke up in the "afterlife" and saw Denny and Dylan Young. ("Drowning on Dry Land")

Dylan and Denny bickered while Meredith wondered what she was doing, with Dylan wanted to tell her straight what was happening and Denny wanting to be more cautious about it. When it seemed that she had accepted her death and wasn't willing to fight to go back, they kept asking her what happened. They eventually got her to admit that she had stopped trying to survive. Denny told her that occasionally, he and Izzie would be in the same place at the same time and he could feel her. This made Meredith decide that she didn't just want moments with Derek, encouraging her to fight to go back. By then, they worried that she might be out of time. ("Some Kind of Miracle")

Izzie started seeing Denny while working on the case of the man who was supposed to get the heart she stole for Denny, Michael Norris. ("Rise Up")

Because she was dating Alex, Izzie started talking to Denny about that and Denny expressed his disgust for seeing her with Alex. When she told Alex that she saw Denny sometimes, he dismissed it, saying it was cool with him because Denny's dead and he has her. ("Wish You Were Here")

Izzie eventually asked Denny to leave, but he continued to stay and appear to her. He frequently said, "I'm here for you," which frustrated her. He told her that she didn't have time to think about anything else. He said he thought that getting to be with her again was heaven, but then he started to think it was hell. Izzie eventually concluded that he was saying that because she was sick. She told him to leave, which he did. ("Stairway to Heaven")

After she learned that she had cancer, Izzie stopped seeing Denny for a while as she had the brain mets removed. When she saw him again, she knew it meant that she had a new brain met. ("What a Difference a Day Makes")

While the doctors fought over Izzie's treatment, she daydreamed about sitting on a beach with Denny. ("Here's to Future Days")

He says that he is funny and really nice. ("Begin the Begin")

Denny's father told Izzie she was nothing like the women Denny usually dated.

Denny first met Izzie when he was admitted to Seattle Grace Hospital as a heart transplant patient. ("Begin the Begin")

When he came back to the hospital later, their relationship started to develop more. ("What Have I Done to Deserve This?")

Soon, she started playing Scrabble with him and spending all her free time in his room, even though she was seeing Alex at the time. ("Band-Aid Covers the Bullet Hole")

Izzie took a celibacy vow along with Meredith and Meredith took up knitting. Izzie had to knit pieces of sweater and replace the ones Meredith did because Meredith wasn't good at knitting. Denny was shocked that she'd taken a vow of celibacy because he wondered how he'd be able to get into her pants with her being celibate. In addition to this, she made Denny a sweater of his own, which she then wore for three hours before giving it to him. ("The Name of the Game")

After seeing the way Izzie and Denny reacted when they disagreed over the portable LVAD, Bailey became worried that their relationship was starting to cross a line. ("Blues for Sister Someone")

After a rough day for him, during which he fell while trying to use stairs, Izzie came into his room and crawled into bed with him, even after he warned her that she'd get in trouble. ("Damage Case")

When a heart became available for Denny, Izzie was told she couldn't prep him for surgery because she'd gotten too attached. However, she convinced Bailey to let her do it, with a warning that she better not get too close. When the heart fell through and she was trying to get the other one, she convinced him to let her cut his LVAD wire to make his heart worse. ("17 Seconds")

After Izzie cut his LVAD, he lost consciousness for a while. When he came to, he proposed to Izzie. ("Deterioration of the Fight or Flight Response")

After his heart transplant, he confirmed that he wanted to marry her. He wanted something that was his own choice after years of doctors making choices for him. She agreed to marry him. When Denny died, Izzie climbed into his bed and wouldn't leave until Alex told her that Denny's body was not him and picked her up off of him. ("Losing My Religion")

When his father came to meet Izzie after Denny's death, he told Izzie that Denny was rich and had written her a check for 8.7 million dollars and a voice message to his parents telling them he had met the love of his life. The money he had given to Izzie was used to establish Denny Duquette Memorial Clinic.

Denny's parents were devastated when he was diagnosed. He'd never been sick a day in his life before his heart failure. One day, Denny left a note for his parents saying he didn't want them to have to watch him die. They assumed he was dead until he left them a voicemail telling them he'd gotten a new heart and was getting married. ("What I Am")

Denny was friendly to all the doctors, particularly Izzie, but when Meredith drowned in Elliott Bay, he was extremely kind to her in the after-life. In the after life he could feel Izzie sometimes, if they were in exactly the same spot at exactly the same time. Denny also told Meredith that if she chose to die, she would only get moments with her loved ones. This changed Meredith. 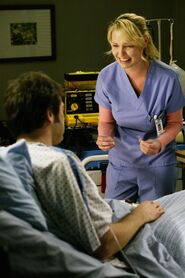 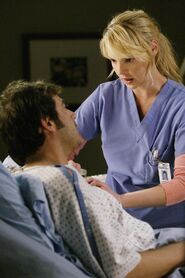 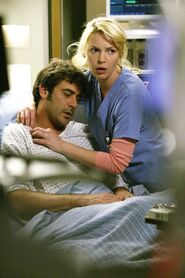 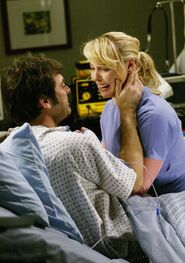 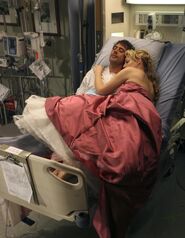 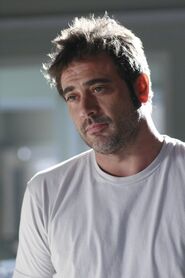 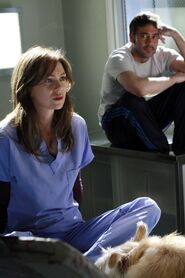 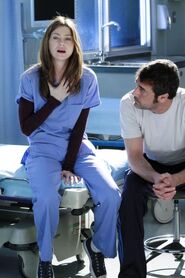 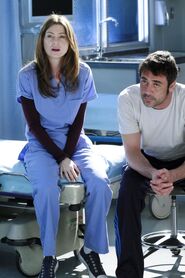 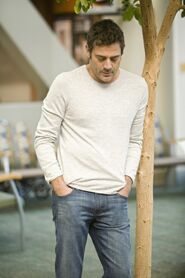 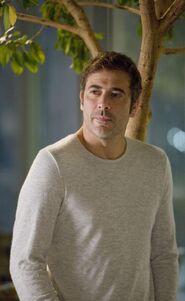 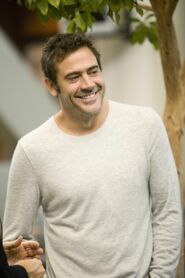 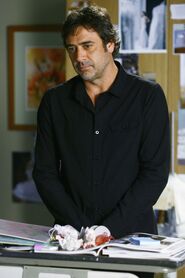