watch 01:22
Grey's Anatomy Profile: Ellis Shepherd
Do you like this video?
Play Sound

Ella Faris & Gracie Faris
Ellis Shepherd is the younger daughter, and youngest child, of Meredith Grey and Derek Shepherd. She has an older brother, Bailey, and an older sister, Zola.

Ellis was likely conceived the day before her father died, as her parents decided to have another baby on that day and then tried and did have one.

After her father's funeral, her mother took her siblings and left Seattle for the duration of her pregnancy, leaving only a note that said, "The kids and I are safe." for friends and family. Despite a placental abruption, which caused Meredith to bleed severely when her water broke, Ellis was delivered successfully in San Diego. ("She's Leaving Home")

Shortly after her birth, her mother and siblings returned to Seattle. ("She's Leaving Home")

When Thatcher died, he left presents for Ellis, Bailey, and Zola in his closet. Meredith took those present to her kids and told them about their grandpa. ("The Winner Takes It All")

For Halloween, she was a ballerina. Her mother got out of jail that day too late to go trick or treating with them, but in time to help them sort candy. ("Whistlin' Past the Graveyard")

During the COVID-19 pandemic, she stayed home with her brother and sister, Amelia, Link, and her new cousin, Scout while her Mom treated COVID patients at the hospital.

Early in the pandemic, Ellis attended her brother's birthday party that year where he stuck his face right in the cake and then licked the icing off his fingers and made a big production of it. This made Ellis, Zola, Meredith, Amelia, Link, and Maggie laugh, something no one had been doing for a while because of the pandemic and the new baby keeping everyone up all night. ("Breathe")

When Amelia realized she'd missed Link's birthday, she convinced the kids to watch a movie by saying it was Link's birthday wish, giving them some free time. ("The Center Won't Hold")

When Meredith was hospitalized with COVID-19, Ellis was eager to talk to her. They were able to talk over Amelia's phone on video chat. ("My Happy Ending")

Shortly after Andrew died, Zola, Bailey, and Ellis had a dance party in the backyard while the grieving adults supervised and tried to figure out how to tell the kids, who had loved Andrew. ("It's All Too Much")

Zola, Bailey, Ellis, Leo, Allison, and Scout all had a play date together with Teddy and Amelia supervising. They spent most of the day outside, playing on their play set. At the end of the day, Owen came over and told Zola that they'd taken Meredith off the ventilator and she was breathing on her own. Zola happily spread the information to the other kids. ("Breathe")

Later, Eric and Maureen bought an RV, packed it with supplies, and drove it from Colorado to Seattle. For two weeks, they had no contact with anyone but each other. When they arrived in Seattle, they were excited to meet Scout and offered to take all four kids to see Mt. Rainier so Amelia and Link could have some time to themselves. ("Sorry Doesn't Always Make It Right")

Ellis lives in Seattle with her mother and her two siblings. Her father died before she was born, likely the very day after she was conceived. 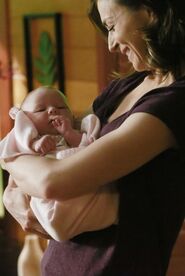 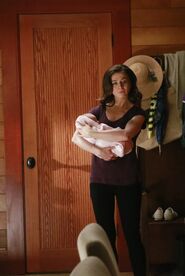 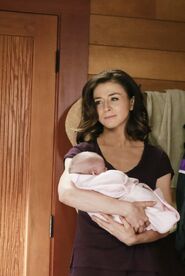 Retrieved from "https://greysanatomy.fandom.com/wiki/Ellis_Shepherd?oldid=337605"
Community content is available under CC-BY-SA unless otherwise noted.