Erin Miller is a girl who came into the ER after her sister started choking.

Erin and her family came into the ER when her younger sister started choking on a coin. In the ER, April prepared to put in a crike, but Owen took the baby and did two quick back thrusts, which dislodged the coin, allowing her to start breathing again. Arizona and Amelia examined her because of her prolonged time without air and said she was breathing well and her neuro exam was clear, but they wanted to keep her for a few hours to observe her. She was moved to the PICU.

Erin wandered away from her parents twice in the ER and was returned, but the third time, she got trapped in a secluded area of the hospital with Keith and Stephanie Edwards during a lockdown. He had her help him gather supplies to start a fire in order to end the lockdown so he could escape. After he had started a fire, Stephanie had Erin look away while she sprayed Keith with alcohol and he caught on fire. Stephanie then took Erin as far away from him as she could. When she saw Keith crawling toward oxygen tanks, she told Erin to get farther away and she went to Keith, just as the tanks exploded. ("True Colors")

After the explosion, Erin, trapped under a surgical microscope, called out to Stephanie, who had been knocked out. Stephanie finally woke up and was able to get Erin's leg freed and get her leg tied off to slow the bleeding. They were able to get out of the lab and into the stairs. The stairs below were engulfed in flames, so they were forced to go up. When they got to the roof, Stephanie realized she had lost her badge, so they were trapped. She put Erin under the blanket and waited. Then she noticed her badge on the steps a few floors down. So she left Erin and went to get it. When she came back, she and Erin went out onto the roof, where Stephanie was unable to get the attention of anyone on the ground. Erin's leg started bleeding again and she passed out, so Stephanie started CPR, which she continued until the firefighters arrived to rescue them. They took Erin downstairs, where Bailey and Webber operated and were able to save Erin's leg. ("Ring of Fire")

She ended up at the hospital when her little sister starting choking on a coin. 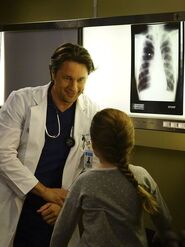 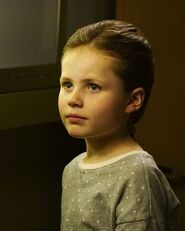 Retrieved from "https://greysanatomy.fandom.com/wiki/Erin_Miller?oldid=288313"
Community content is available under CC-BY-SA unless otherwise noted.