I Feel the Earth Move

When an earthquake hit Seattle, Ethan was in an elevator with Maggie Pierce. When the elevator stopped moving as a safety precaution, Ethan mentioned that it had happened the last time he was in an elevator during an earthquake. She was shocked as she didn't know earthquakes were a potential danger of living in Seattle. When she said she'd have to avoid being in elevators with her, he said he would just start taking the stairs. ("I Feel the Earth Move")

Maggie and Ethan met again when Ethan did the films for Jean Dominy, who had a hip injury shortly after having heart surgery. After they reviewed the scans, Ethan flirted with Maggie and asked her out on a date. She declined and they had an awkward moment before he pointed out that she was in what is basically his office, so she should be the one leaving.

After the Jean Dominy case was completed, Maggie found Ethan, again in an elevator, and accepted his date. After a few minutes of awkward conversation, they agreed to have their date at the end of the week. ("I Feel the Earth Move")

He and Maggie went on a date, but according to him, she talked the whole time and then paid. Maggie explained to him that she brought the thunder, which works at work, but isn't great for dates. After she explained what happened, he agreed to give it another chance and said next time, he'd bring the thunder. ("Crazy Love")

Within six months of breaking up with Maggie, Ethan was engaged and invited Maggie to his wedding. ("I Choose You")

He had a crush on Maggie Pierce. He asked her on a date while they worked on a case together. She initially declined, but after getting a push from a patient, she accepted his offer and they agreed to go on a date later that week. ("I Feel the Earth Move")

They went on the date, but Ethan didn't think it went well, saying that Maggie talked the whole time, ordered for him, and then paid and left. After explaining to him what had happened, Ethan agreed to go on another date with her. ("Crazy Love")

He and Maggie dated for about six months before she got bored and let it fizzle out. ("I Choose You")

Within six months of breaking up with Maggie, he got engaged to someone else. ("I Choose You")

He appears to have a good professional relationship with Callie Torres. They are on a first-name basis.

Ethan is an attending radiologist at Grey Sloan Memorial Hospital. 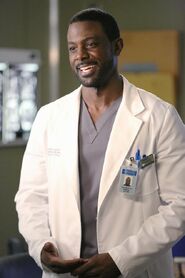 Retrieved from "https://greysanatomy.fandom.com/wiki/Ethan_Boyd?oldid=269759"
Community content is available under CC-BY-SA unless otherwise noted.