Ethan Dawson is the son of Paul Dawson and Rachel Dawson. He came to the hospital after his parents had a car accident. He had a particularly strong relationship with Owen Hunt.

Ethan was around 10 when he and his parents had a car accident in Seattle. Ethan was walking around the scene until the paramedics took him to the hospital with his parents. One of the paramedics, Matthew, shielded Ethan from a blast. While they were being taken care of, Leah Murphy put a bandage on his wrist. Ethan stayed with Owen afterwards, and he calmed Ethan when the explosion of the tanker send shockwaves through the hospital. Ethan ran away from social services later, and Owen set him up in a room so he could wait for news about his parents. However, that evening, Ethan fled from his room and the social worker that was there to take care of him, and went to the ICU to see his mother. Unfortunately, she didn't recognize him due to her brain injury, and started screaming. Owen took a shocked Ethan to the cafeteria and they ate ice cream to calm Ethan down. He convinced Ethan to stay in his room, but later took him out to go see his sleeping mother. He told him both his parents made it through the day. ("Can't Fight This Feeling")

As both of Ethan's parents didn't wake up after surgery, the staff called in his grandmother Nancy. After Ethan's mother woke up, Owen took Ethan to see her again, and this time, she recognized him. Nancy's flight got cancelled, so Ethan had to stay with the social worker once more. However, in order to keep him in the hospital, Owen pretended he was concerned Ethan was suffering from short limb syndrome just to keep him in the hospital. Owen assured him he wasn't really sick, and Ethan confessed he was really worried over his parents, especially his dad, who had not yet woken up. ("She's Killing Me")

Owen continued to take special care of Ethan until Nancy finally arrived in Seattle. During lunch with his mother, Ethan witnessed how she suffered a seizure. The doctors rushed her to surgery, and a nurse stayed behind to watch Ethan. Shortly after, Owen informed Ethan his mother had passed away. Ethan then consoled his crying grandmother. ("Sleeping Monster")

Ethan continued to be worried over his father, who had still not woken up after eight days. To take his mind off things, Owen played soccer with him in the ambulance bay until Nancy wanted to go back to her hotel to get some sleep. Ethan wanted to stay, but Owen told him to go, promising he'd call if anything happened. Soon after, Ethan was brought into the ER, having taken an overdose of Nancy's sleeping pills. Arizona saved him, but the incident legally required her to call social services. Ethan explained to Owen that he just wanted to sleep, and he just took the pills since he didn't have parents anymore to give him consent. Cristina assured Ethan they were doing everything they could to get his dad to wake up, but Ethan started crying. Owen comforted him. The social worker didn't take Ethan into custody due to the extraordinary circumstances, but Nancy told Owen that she couldn't take care of Ethan, so they needed someone who could in case Ethan's father would not wake up. ("Do You Believe in Magic")

Another nine days later, Owen lated informed Ethan that if his dad wouldn't wake up, he'd have to go to a foster family who could take care of him. Owen secretly desired to adopt Ethan himself, but Cristina finally managed to wake up Paul, meaning Ethan could stay with his father. ("Readiness is All")

Ethan lived with his parents, Paul and Rachel Dawson. His grandmother Nancy lived on the East Coast, where her husband was in a facility. Ethan's other grandparents had died.

During his weeks at the hospital, Ethan formed a friendship with Owen. They played soccer together and Ethan came to really trust Owen, expressing his desire to stay with Owen rather than go with his grandmother, and he requested that Owen come with him to the other hospital. Owen secretly wanted to adopt Ethan, unbeknownst to him, so he rather abruptly broke off their friendship once it became clear that Ethan would be able to stay with his dad. 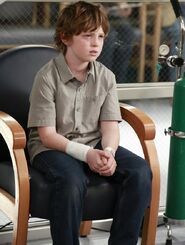 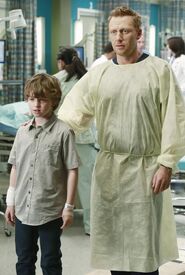 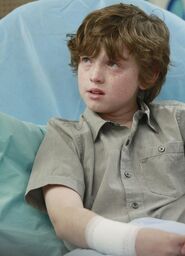 Retrieved from "https://greysanatomy.fandom.com/wiki/Ethan_Dawson?oldid=269833"
Community content is available under CC-BY-SA unless otherwise noted.