A crash in Puget Sound leaves many dead and injured

The ferry crash is a catastrophe that happened during a fog.

One morning, a fog bank caused a container ship to clip a ferry in Puget Sound. Many of the ferry's passengers were injured. Triage was set up at the waterfront and doctors from Seattle Grace Hospital were sent into the field to triage patients before they could be moved to the hospital.

Vince, who had minor injuries, called Izzie out onto the ferry, where his friend, Rick, was trapped under a car. Search and Rescue was backed up and couldn't come get him back, so Vince took Izzie there in the hopes she could keep him alive until they could come. Rick, Vince, and Greg had gone back in to help get people out after the initial crash. While he was working, the cars shifted and trapped him. Izzie gave Greg a red tag and told him to find Search and Rescue and tell them he couldn't wait. She set his arm to reduce the pain. Greg came back and said Search and Rescue had 15 red tags so they couldn't come.

Alex looked over the edge of the dock and saw a pregnant woman under a pylon. Despite a cop telling him it wasn't safe, Alex climbed down and lifted the pylon off her. He initially believed she was dead and put a black tag on her body, but as he went to leave, he saw her move. He was able to get her free and she was taken to the hospital with severe crush injuries.

While triaging, George told a paramedic he had two that needed to be transported and five dead, four adults and a child. Carly Height heard that and asked about the dead child, because her son, Christopher, was missing. George started to examine Carly, saying she needed to lie down. She was more interested in finding her son, but George told her the dead child was a girl. George promised to find her son if she'd let him take her to triage. Whens she was taken to the hospital, she made George promise to find her son before she'd have surgery.

Meredith found a little girl on the scene Lisa, who had peed her pants, but was uninjured. She went to take her to find her mom, but along the way, she got called to deal with a patient, so she left her with a paramedic. The paramedic also got called away and left Lisa alone again. Lisa found Meredith again and helped her treat a patient at the water's edge. Lisa then watched as the patient panicked and pushed Meredith into the water. ("Walk on Water")

At the hospital, George lied to Carly and said he'd found Chris in order to get her to have surgery. He said that if his lie helped save her life, he was okay with that. While she was in surgery, he searched frantically for Chris, including in the morgue, before eventually finding him in another OR having surgery.

The pregnant Jane Doe was taken into surgery to treat her injuries. Addison monitored her baby throughout.

Rick kept having seizures due to the increased pressure on his brain, so she called the hospital and Richard and Mark talked her through drilling burr holes to relieve the pressure. After the pressure was relieved, he stopped seizing and opened his eyes. They were able to get him out and to the hospital, where he had surgery.

Alex, tasked with managing the families waiting for information, decided to take polaroids of the patients, which their families could then identify to get more information. He started with the living patients and then also took pictures of the bodies in the morgue. When he heard a man was looking for his pregnant wife, he initially thought of the Jane Doe, but Addison reminded him that the odds were that more than one woman on the ferry was pregnant. Alex found a pregnant woman in the morgue and showed the man the two photographs. He identified the body as his wife.

Lisa went and found Derek and let him back to the place where Meredith had gone over into the water. He jumped into the water and pulled her out. He then did CPR as they took her to the hospital, where they started to warm her up. ("Drowning on Dry Land") 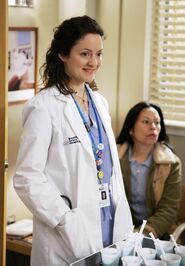 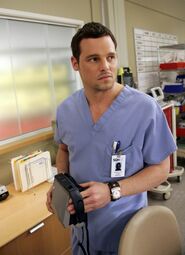 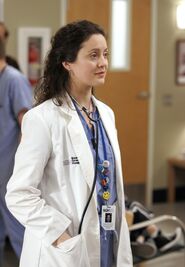 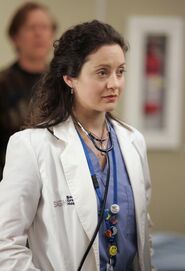 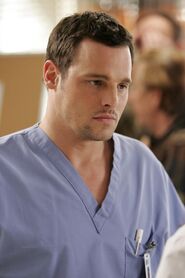 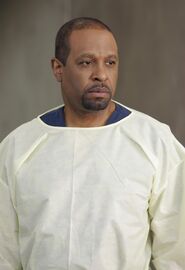