Izzie, Meredith, and George lie under the Christmas tree.

Grandma Got Run Over By a Reindeer is the twelfth episode and mid-season finale of the second season and the 21st overall episode of Grey's Anatomy.

Tis the season to be jolly, as Burke and Cristina's religious differences are highlighted when they treat a boy who is refusing a heart transplant, while Derek has little religious problems with his patients of mixed Jewish and Christian family beginning for Chrismukkah while he feels less than festive, while Alex has problems with his own faith in himself as the rest of the interns try to help him study for his exam.

Tim, 38, fell off his roof while hanging decorations and hit his head. He had focal left arm weakness. He was diagnosed with a subdural hematoma. After his surgery, he had significant changes to his personality. Another scan revealed another bleed, so he was taken back into surgery to stop it.

Nadia, 41, was in the hospital for excision of her gastric ulcer. Her surgery kept being pushed because of emergencies. She said she'd had three bleeding ulcers in the last five years. Eventually, she started vomiting up blood, which made her case emergent, and she was taken into surgery. When they opened her up, they discovered that she actually had two ulcers.

Justin had received a heart transplant as an infant, but had worn it out and needed another one, for which he had been waiting two years. The heart was transplanted successfully, but he struggled after the surgery. He went into cardiac arrest, but they were able to resuscitate him quickly. He eventually started to come back around.

A man, 44, came in with a gastric rupture from eating fruitcake after gastric bypass surgery. He was taken into surgery to fix the damage. After his surgery, he wasn't left with much of his stomach.

A man was brought in with a hernia he got trying to gift wrap a large TV. They had to use mesh to close the gap. 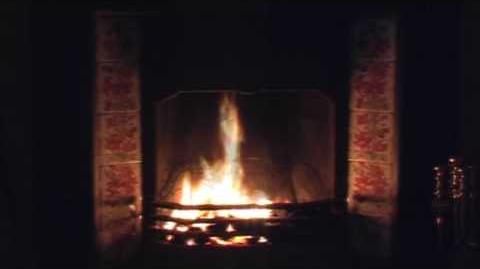 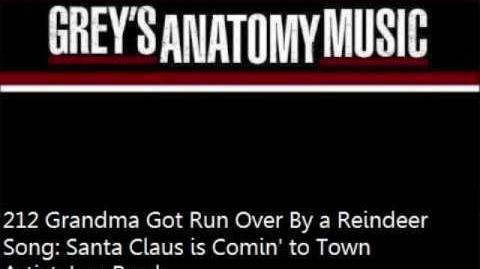 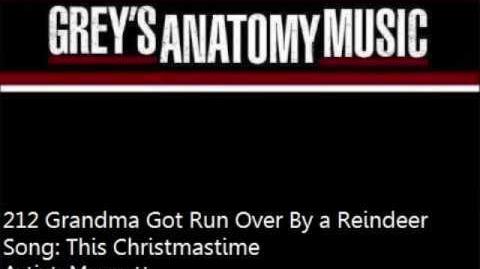 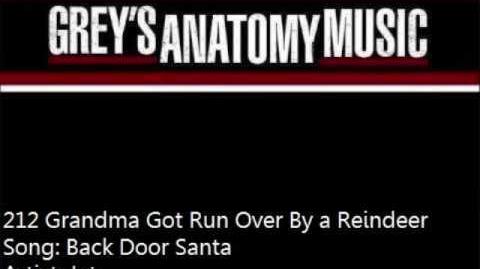 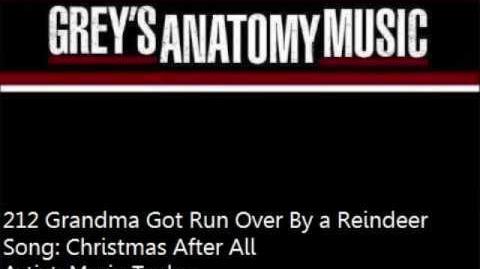 "Christmas After All" - Maria Taylor 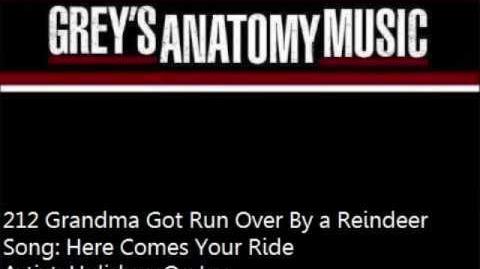 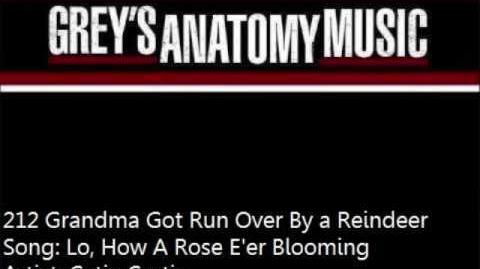 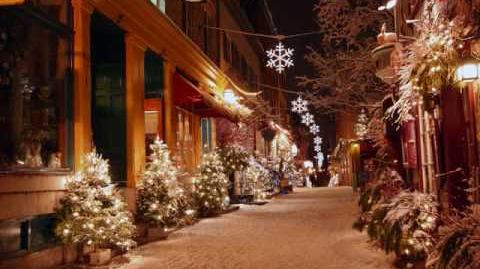 "It Came Upon a Midnight Clear" - Sixpence None the Richer 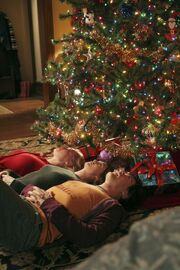 (Bailey, who is pregnant, is rubbing her stomach and has labored breaths as she walks through the halls of the hospital. The interns are talking as they follow her)
George: Look at her belly. She's almost as wide as she is tall.
Meredith: Are her ankles swollen? Is that why she's waddling?
Izzie: What's gonna happen to us when she goes on leave?
Cristina: She's going on leave?
Meredith: What do you think happens when people push babies out of their vagina?
(George laughs)
George: Do you think we're going to get a new resident?
Alex: Nah. They'll probably just let us wander around unattended. See how much damage we can do.
Izzie: Yeah, well, you would know.

Izzie: Hey, guys, we should all get together and get Bailey a Christmas gift for the baby, or we could, um, organize some sort of Secret Santa thing!
Cristina: Okay, listen Tiny Tim, you can take your...
(George and Meredith move in next to each other to block Cristina from Izzie)
George: Sounds great.
Meredith: Secret Santa sounds great, Izzie.

George: Looks like Santa Claus threw up in here.

Bailey: You see this, O'Malley? I make one mistake with this scalpel and this man's dead. My husband, he makes mistakes at his job all the time. As far as I know he's never killed anyone but I have and you will and Alex did. He made a math mistake and a man died for it. Run that past your accountant. See how he'd feel if every mistake he made, someone ended up dead. You don't have to like Alex, you don't have to care about him, but you damn well have to be on his side.

Cristina: (sees Alex examining Meredith) Okay, seriously, if you're that lonely there are excellent vibrators. I can give you a catalogue.

Cristina: I'm a 55 year old man. I'm nauseous and I can't stop throwing up.
Alex: Forget it all right, I didn't ask for anybody's help.
Cristina: Okay, Evil Spawn, you can nurse your pride, key word being nurse, or you can pass your test and be a doctor. Up to you.
Alex: Any abdominal pain?
Cristina: Yes, from my giant fat belly all the way to my back. Oh, and I'm drunk. Hiccup, hiccup.

Izzie: He cheated on me with George's skanky syph nurse!
George: That is just plain rude!
Meredith: We know! He cheated on you! That's why we let you turn the living room into Santa's freaking Village.
Izzie: What?
Meredith: We're not big on holidays you know that. But we're trying to be supportive because you are having a hard time. But right now, Alex, he's having a harder time.
Izzie: Why does everyone care what kinda time Alex is having?
Meredith: Because he's dirty Uncle Sal.
George: Sorry?
Cristina: Huh?
Meredith: He's dirty Uncle Sal. The one who embarrasses everyone at family reunions and who can't be left alone with the teenage girls but you invite him to the picnic anyway.
Cristina: Sorry. What?
George: I'm still lost.
Meredith: I have a mother who doesn't recognize me. As far as family goes, this hospital, you guys are it. So, I know you're pissed at Alex but maybe you could try and help him anyway. Sorta like in the spirit of this holiday you keep shoving down everybody's throats.

Bailey: Do not kick me.
George: Excuse me?
Bailey: Are you kicking me under the table, O'Malley?
George: No!
Bailey: Then clearly I wasn't talking to you!

Alex: Why would you want to help me after what I did?
Izzie: Because it's what Jesus would freaking do!

Addison: Christmas, Derek. We love Christmas. At least we used to.
Derek: Yeah. Christmas makes you want to be with people you love. I'm not saying this to hurt you or because I want to leave you. Because I don't. Meredith wasn't a fling. She wasn't revenge. I fell in love with her. That doesn't go away because I decided to stay with you.