Gretchen McKay is a patient who came into the ER after a car accident.

Gretchen and her family were brought to the ER after being in a car accident. Gretchen was more concerned with her husband and children's safety than her own. She had some abdominal pain, so she was taken into the ER, where her BP dropped. It came back up when they rolled her onto her side, so they propped her up that way. Arizona came in to examine her and said they both looked good, but she ordered a CT just to be safe. Jasmine came in to see her while she waited, showing her Spencer's lost tooth. Gretchen told Jasmine she was in charge. The CT was clear, so Ben and Andrew prepared to move her up to OB. On the way, Gretchen started to complain of additional pain, so they propped her up even higher. A Code Pink was called, blocking them in the hallway just as they lost the fetal heartbeat. Ben had Andrew find a crash cart, which he then used to do a c-section in the hallway. After he had the baby delivered, Bailey found them. She stepped in to help Andrew stop Gretchen's bleeding while Ben took the baby to the NICU. Gretchen was rushed to the OR, where Arizona operated to try to stop the bleeding. Despite her best efforts, Gretchen was pronounced dead in the OR.

She was married to Omar Singh until her death.

She and her husband had three kids and were expecting a fourth. The fourth was delivered while they were hospitalized, but died shortly after Gretchen herself. 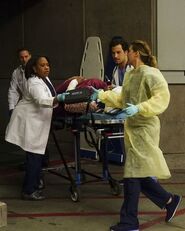 Retrieved from "https://greysanatomy.fandom.com/wiki/Gretchen_McKay?oldid=236642"
Community content is available under CC-BY-SA unless otherwise noted.