Grey's Anatomy: B-Team is a six-episode web series following the newest batch of doctors to join Grey Sloan Memorial Hospital. It became available on ABC.com starting Thursday, January 11, 2018. It was written by Barbara Kaye Friend and directed by Sarah Drew.

Follow the new interns as they experience the first day of their internship at Grey Sloan Memorial Hospital.

Casey coaches himself to prepare for his first day, reminding himself not to stand out or throw up. Dahlia checks her note cards and asks a question. Casey answers, but Dahlia thinks he's wrong, when he's actually right. Levi comes in and says he thinks his mom forgot to pack his stethoscope and wonders if it's gross to borrow one. Taryn says it is and tells him to shut up, because she's in her zone. Vik comes in, excited about his first day. He high fives everyone except Taryn, who refuses. Dahlia wonders how he's not freaked out and he says he does get freaked out. He crushes first impressions. Levi says he rotated at GSM a few months ago and he hit it of with people. Sam comes in, excited because she saw Meredith at the coffee cart and ordered the same drink as she had. She asks if that's creepy. The other interns don't reply, but then Bailey comes in and tells her it's very creepy. Bailey wonders why not of the interns were in the conference room while she was there waiting for them. Taryn asks about an intern scrubbing in. Bailey says they'll have the opportunity to prove they are ready to scrub in. Someone might surprise her. She then starts to tell them her five rules as she leads them out of the locker room.

Sam is examining Oscar when Levi comes in and says Oliver was his patient. Oscar says he's okay with the change, but Levi still tries to fight for the patient. He says DeLuca told him to work on Oliver, but Levi says Karev told him and Karev's the attending. Sam tries to draw blood, but hurts Oliver. Oliver suggests that Levi should do it because he wasn't bad. Alex comes in and asks what's happening and then takes over and has Sam present the case. He is having his gallbladder removed. Levi asks Alex about an intern operating. Alex reminds him about his glasses falling into a patient. Levi says it won't happen again and Alex says that's true, because he told the nurses to assign Levi to B-Team. If it's in a bedpan, he cleans it. If it's in a barf bucket, he cleans it. If it's blood, he cleans it. After he leaves, Sam points out that Alex hates Levi. Levi says he slept with Jo, which makes Sam laugh, because she doesn't believe it's true.

Vik walks into the room where Maggie is examining a patient. He immediately sucks up to her. The patient immediately knows he's a new intern. Mrs. Nunez is in for a valve replacement, but has new chest pains and shortness of breath. Vik tries to reassure her and asks if she wants the procedure explained to her. She tells him his breath stinks and she's had the surgery before. Vik shows off what he knows about her condition and then tries to reassure Mrs. Nunez again, saying he'll be right there assisting. Maggie tells him he won't. He says he can handle anything, but when the patient codes, he freezes and watches as Maggie runs the code. Maggie assigns him to the code team for the floor.

Richard asks Dahlia about several patients. She impresses him with her quick answers. He says she's one of the most competent interns he's ever seen on their first day. She ruins it by asking if she can join him in the OR. She shows off her flash cards to him, but he says the print is small. He tells her she won't be scrubbing in on the first day. He offers to put her on his service for the week and when she's ready, she can scrub in. She asks if she can also work with Dr. Grey, because she's going to win the Harper Avery. Richard stops her fawning and says they need to round on a patient. Dahlia gets confused and can't find the room number for their patient. Richard has to call out the patient's name to find her and quips that maybe he should give her to Meredith, which delights her.

Owen is sitting at the ER desk when Taryn and Casey come up and say they're reporting for duty. They're done rounding on his post-ops. They ask if they can scrub in. He says he doesn't have a surgery now, but he does need discharge papers and a patient who. Before he can finish, Taryn and Casey both try to call dibs on the patient. Taryn even says Casey is freakishly fast with computers. Owen agrees and takes Taryn with him. He takes her to a cooler holding a liver. The team was delayed, so she has to watch the liver. After he leaves, she opens the cooler and looks at the liver. Casey comes in after finishing the discharge and asks where her patient is. He then sees the liver and smirks. She wants to be cutting people open, not babysitting organs. Suddenly, a team runs by the window. Owen says there's a huge trauma and April needs an intern. Because Taryn already has an assignment, he takes Casey. Taryn remarks that it's literally just a lunch box, then she sits down and starts talking to the liver.

Vik says he saw six codes, but hid in the bathroom for two. Levi says at least he was in the pit. B-Team means more barf than blood. Dahlia says she accidentally held Webber's hand. Sam and Casey come in. Casey has blood on his scrubs, so they ask if he scrubbed in. He didn't, but he was right next to April when she shoved her hand in a gaping leg wound. Taryn says she didn't even get to see a leg. Sam asks if any of them got to scrub in. No one did. Casey wonders if they'll ever set foot in an OR. Taryn says Levi was the first to kill a patient and says Vik owes her $20. Levi says he didn't kill the patient. Sam says he just dropped his glasses in an open body cavity. They all heard about that. It was all over Twitter. He tries to defend himself, but then Bailey comes in and they all immediately stop laughing. She asks who's on call. Vik, Taryn, and another intern raise their hands. A big rig tipped over, so there's incoming. Taryn asks if that means someone will get to scrub in, because she said one of them would get the chance to operate. She says she actually said they'd get the opportunity to prove they are ready to scrub in, not that they'd scrub in. She says they should be smart enough to understand the difference. Then she says she doesn't see anyone moving, so the on-call interns leave. She tells the others to go home because they just finished their first days as a surgeon. Levi, Sam, and Casey realize Bailey played them. 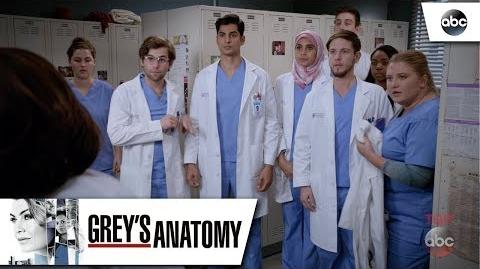 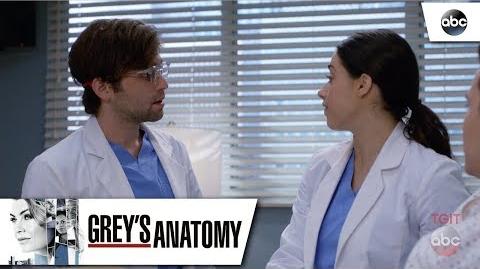 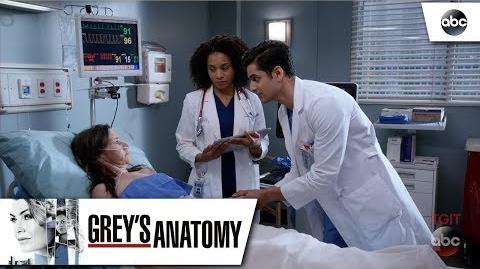 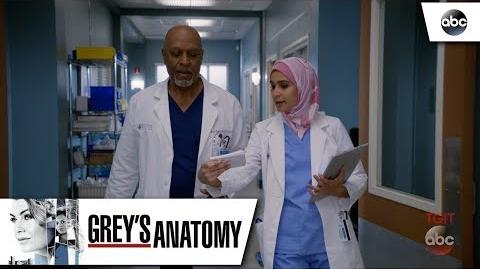 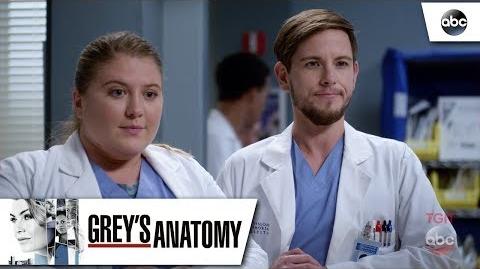 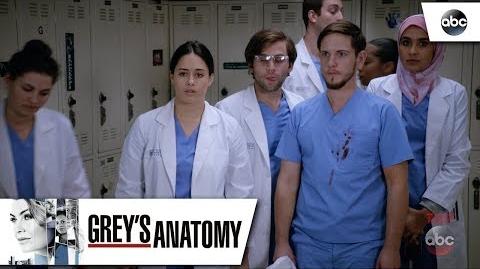