Jump Into the Fog

Gus Carter is a patient who was diagnosed with a thymoma.

Gus came into the ER after sixteen days having a cough and recurrent sinus infection. Due to his autism, he wouldn't let the doctors examine him, so Alex used his love of buildings and LEGO to talk to him. Gus was able to use LEGO to show Alex that he had significant pain in his chest. They ran a chest CT, which showed a thymoma, which Maggie noted is always malignant in children, but curable with surgery. However, before they could operate, he needed a blood transfusion as he was anemic. They got him blood, but he rejected it because it wasn't the right type. They re-typed his blood and showed AB, but with no Rh antigen, a very rare occurrence. Before he could have surgery, they needed to find blood donors who were an exact match to his blood so he wouldn't reject it. They identified only four potential donors in the world, but Alex promised his parents they'd keep looking until they found the blood he needed. ("The Whole Package")

During his stay at the hospital, Gus continued to build with LEGO kits, including one of the Arc de Triomphe. ("Head Over High Heels")

The wait was thought to be over when a call came in from Canada from a doctor treating a patient who was also Rhnull. However, this was a misunderstanding and the doctor was hoping to find a donor for her patient, not offering her patient as a donor. When Gus's mother found out about the error, she was upset. ("What I Did for Love")

Over time, Gus got so weak, he couldn't build his LEGO kits anymore. A blood donor was found in London, but she had severe agoraphobia, making the trip to the United States extremely difficult for her, even with her therapist. When her therapist was detained at the airport, she struggled even more and refused to leave the plane. However, after a call with Lori and meeting Gus, who was unconscious after having a heart attack, she agreed to be carried off the plane. She got into the car, but then a fog settled in, so they were stuck in traffic. Gus's organs continued to fail because of oxygen debt, so Alex took him to the hyperbaric chamber, in the hopes it would give him enough time to wait for the blood transfusion. ("Drawn to the Blood")

In the hyperbaric chamber, Gus was able to get more oxygen to his organs. However, he still coded, so they started decompressing the chamber as Frances was still on her way to the hospital with Owen. Alex did chest compressions and refused to stop until the blood had been transfused, at which point, he went back into sinus rhythm and regained consciousness. He immediately started to get stronger and his mother and Frances both watched as he was able to play a video game in his bed. ("Jump Into the Fog") 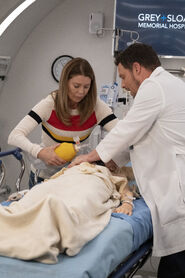 Retrieved from "https://greysanatomy.fandom.com/wiki/Gus_Carter?oldid=278774"
Community content is available under CC-BY-SA unless otherwise noted.