Ben and Derek repair Zola's costume for the party

A Halloween Party was thrown by Meredith at Alex's house prior to trick or treating.

Because of their isolation in the woods, Meredith asked Alex if she could have a party and go trick or treating from his house. He agreed and she invited Callie and Arizona and Sofia as well as other families from the daycare to come celebrate with them. When Cristina overheard her talking about the party, Meredith also invited her.

Callie and Arizona disagreed over Sofia's costume after she told Arizona she wanted to be an astronaut and Callie that she wanted to be a princess. They ultimately compromised and dressed her as a space princess, using elements of both costumes.

Cristina came into the party only long enough to drop off cupcakes before leaving. After the party was over, the adults took the kids trick or treating. 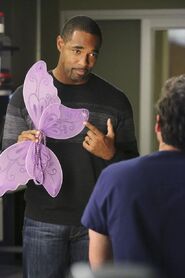