The day after Rachel Bishop had brain surgery, Amelia Shepherd decided she wanted to try early ambulation, getting her up and moving early, with her. Hannah assisted Stephanie Edwards and later Jo Wilson in getting Rachel up and moving.

Seeing that the interns weren't well-trained in delivering bad news to patient families, Owen Hunt insisted that they all be trained. He taught them the four Ls (Location, language, body language, and leave) and informed them that they'd be telling the families of the people who died in the ER that day. ("Old Time Rock and Roll")

When Sofia ended up in the ER, Hannah gave the chart to Penny, knowing she was seeing one of Sofia's mothers. ("When It Hurts So Bad")

When a Code Pink was called in the hospital, Hannah was trapped in the NICU with Arizona Robbins. Arizona checked to verify that all the babies were in their beds, saying that when someone's stealing babies, you count all the babies.

She later gossiped with Isaac as they watched Ben through the window, sharing stories of what each of them had heard happened to get Ben in trouble. ("There's a Fine, Fine Line")

When a building collapsed in Seattle, Hannah worked on back-to-back surgeries with Meredith. She also later held Meredith's phone while she left a message for Alex. ("You Haven't Done Nothin'")

When Cynthia Daniels' kidney died while the other was being donated to her son, Hannah helped call around to other hospitals to look for other donor kidneys to use. ("Back Where You Belong")

When Jenna was in the hospital to have fetal surgery, Hannah was on her case. She also scrubbed in when Arizona and Maggie operated. ("What's Inside")

Hannah was on the case with Alex when he checked on Veronica Kays. ("Don't Stop Me Now")

When Stephanie saw several security guards run past her in the hallway, she stopped Hannah to ask her what was happening. Hannah told her a patient had been raped and the rapist was on the loose. ("True Colors")

Hannah was on Dr. Carr's case. When she was sent to draw blood for labs, Meredith said she'd do it and sent Hannah away. ("Go Big or Go Home")

Meredith was operating with Hannah's help and Meredith talked her through the procedure step by step. ("Gut Feeling")

When an article came out that condemned the healthcare industry, stemming from a list of possible article topics Meredith floated to a publisher, the residents discussed it in the locker room while getting ready for their days. Taryn liked the article and said Meredith was a badass for writing it, but Blake warned them that while he had Hopkins and Koracick on his resumé, they might have difficulty finding other jobs.

Later that day, she worked on Alicia Chen, who was hit by a man who fell from a plane. ("It's Raining Men")

On Meredith's first day back at work, Hannah and the other residents greeted her with a cake. Afterward, they went on rounds. ("Let's All Go to the Bar")

While Hannah was at the bar with some other residents, a car crashed through a window and into the bar. ("Let's All Go to the Bar")

Hannah had some injuries to her face, but remained stable. She became upset when Taryn repeatedly said she thought she was dying. Hannah assured her she wasn't dying, that she was just drunk and possibly brain-damaged. When the firefighters cleared an exit, she was stable enough to walk out the bar through the back. ("I Know This Bar")

Hannah rode in an ambulance to the ER. Ben checked her out, but said she only had minor lacerations and bruises. She said she wanted to help, so Bailey told her to clean up and get to work. She helped on the case of Blake Simms, whom she admitted she didn't know very well. While he was in surgery, Hannah commented about Tom's attitude and said Teddy could do so much better, not knowing that Teddy was actually seeing Owen, not Tom. Owen later sent Hannah out of the OR to deal with a new intake in the ER. ("Help Me Through the Night")

When Joey Phillips was brought into the hospital following his fall, Hannah greeted the aid car in the ambulance bay. ("House Where Nobody Lives")

Hannah and the other residents were assigned to look into every possible diagnosis for Suzanne Britland. They gathered in Taryn's hospital room and went over every possible explanation for her symptoms. ("Save the Last Dance for Me")

Hannah was impressed with Meredith's organization of a pro bono surgery day for patients who couldn't otherwise afford to have surgery. ("Give a Little Bit")

Hannah was among the medical staff in the gallery watching Richard's explantation and hip replacement. ("Put on a Happy Face") 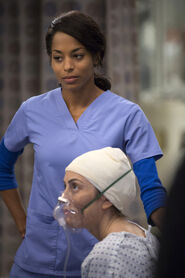 Retrieved from "https://greysanatomy.fandom.com/wiki/Hannah_Brody?oldid=310429"
Community content is available under CC-BY-SA unless otherwise noted.