Harriet Kepner-Avery is the daughter of April Kepner and Jackson Avery.

On the day of Owen and Amelia's wedding, April went into labor while looking for the ring at Meredith's House. Ben, who was with her, wanted to take her to the hospital, but she didn't want to chance being caught in the car in the rain, so she said she'd just have the baby at Meredith's house. Everything was going well until Ben did a pelvic exam after her water broke. He was able to feel the baby's foot and the cord, which had no pulse. April insisted that Ben do an emergency c-section at the house. Using a kitchen knife and with help from Arizona over the phone, he delivered the baby. They were then taken to the hospital. After April was out of surgery, she held her newborn baby. ("Family Affair")

Later, as April healed, Catherine came to visit and held her new granddaughter. April then informed her that they had named the baby Harriet. Catherine loved the name, but disliked it when April told her the baby's last name wouldn't be Avery. Jackson later told her they were hyphenating the last name. ("Undo")

Before Catherine's surgery, Harriet was brought to see her. ("The Winner Takes It All")

Her older brother, Samuel, died before she was born. 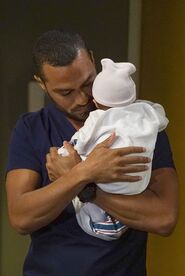 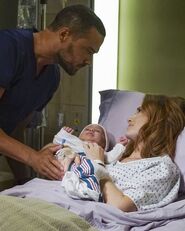 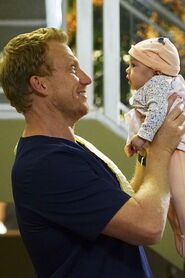 Retrieved from "https://greysanatomy.fandom.com/wiki/Harriet_Kepner-Avery?oldid=313771"
Community content is available under CC-BY-SA unless otherwise noted.