Hayley May was a psych patient at Seattle Grace Mercy West Hospital who was incorrectly diagnosed with paranoid schizophrenia.

After she started having symptoms that looked like paranoid schizophrenia, she was diagnosed and her parents tried to have her committed to the psychiatric ward.

After she attempted to scratch her eyes out, Hayley had to be cleared by surgery before she could be committed to the psychiatric ward. While her parents were talking to Alex, she grabbed a syringe and threatened to stab herself in the chest. Alex talked her down, saying that he believed her when she said she wasn't crazy. He asked her to put the syringe down so he could run tests. She did and was restrained. However, because he had promised her, Alex wanted to run the tests. Her parents opposed it, saying she'd already had tests and been diagnosed. They agreed to let them run the tests. The scans showed nothing, but Alex wasn't convinced. He said he knows crazy and Hayley isn't crazy. He was given four hours to find another diagnosis, so he enlisted the help of Lexie Grey and her photographic memory to find the cause. After doing some research, he believed she had Superior Canal Dehiscence Syndrome. They verified the diagnosis and then took her into surgery. The surgery had a chance not to be successful, but it worked and Hayley was excited to be able to function normally.

She had a grandfather who was schizophrenic and had killed himself. 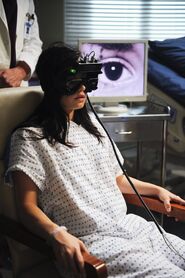