I Want You With Me

Heather Brooks was one of the five new surgical interns at Grey Sloan Memorial Hospital.

Not much is known about Heather's life before her internship except that her parents had a messy divorce and always put her in the middle of it. She was a sleepwalker and once in college woke up having sex.

When Cristina was in the hospital after the plane crash and wasn't speaking, she and Shane stood outside the room, talking about her until she threw a vase at them, scaring them off. ("Remember the Time")

Early in her internship, Heather slept with Alex Karev because she has social anxiety and having sex is easier than talking. ("Second Opinion")

When Cristina came back from Minnesota, she dubbed Heather "Mousey," a nickname that stuck, and Heather quickly decided she liked her. ("Second Opinion")

When Arizona Robbins returned to work, Heather was assigned to follow her with a wheelchair in case she needed to sit down. ("I Was Made for Lovin' You")

While secretly consulting Meredith about patients, Heather overheard that the hospital was being sold for parts. She then passed the news on to the other interns and to Bailey. ("This is Why We Fight")

When the hospital bought a LODOX to do full-body scans with smaller amounts of radiation, Heather offered to tests it out to find a marble she stuck up her nose as a child. Eventually, they did use it and found the location of the marble. ("Idle Hands")

When Derek was told he needed to teach interns other than Shane Ross, Heather was assigned to his service. Derek was initially annoyed by her need to chatter in the OR, which she did because she was nervous, he was impressed by her reflexes. ("Can't Fight This Feeling")

He continued to mentor Heather, though she was initially reluctant. She was upset to be removed from the case of Kayla Wayne, who had been sawed in half, in order to work on a patient with Moyamoya disease. ("Do You Believe in Magic")

Derek figured out that Heather chattered throughout their surgeries to coverup the fact that she lacked confidence in her natural talent and he took it upon himself to build up her confidence. Later, while they were placing a stent in Paul Dawson, Derek was informed that Meredith had fallen down the stairs and was going to OB to get checked out. Heather assured him that the hard part was over and she could finish without him. ("Readiness is All")

After the superstorm, Dr. Shepherd told Shane to find Brooks. When he bumped into Brooks, he told her to go and search for Dr. Webber, which Dr. Bailey told him to do. Brooks went into the generator room, searching for Dr. Webber and saw him suffering from electrical shock. She ran to help him and stepped into a water puddle, which had electricity running through it causing her to be electrocuted. Just before she fell, her head hit a generator box and she collapsed. When Shane found her, he and Derek rushed her into surgery. Although they repaired her subdural brain bleed, she died on the table due to too much swelling in her brain. ("I Want You With Me")

Despite the fact that she died before she finished her internship, a personalized lab coat was accidentally made for her which Shane found in an empty cubby when the interns moved into the residents' lounge.

Heather Brooks was overly energetic and enthusiastic about nearly everything, and because of this her more serious fellow doctors found her to be annoying. Heather was known for saying the wrong thing at the wrong time and being utterly awkward to no end. She was also a bit sarcastic in nature and often told weird, sometimes unsettling jokes. Although sometimes endearing, Heather was not well-liked at the hospital and upon her death, her fellow interns could not think of one nice story to tell her mother. Instead, they told stories stolen from Meredith about George and their own experiences with each other. They did, however, admit to being upset over her death. Heather was also compassionate and caring, proven by the fact that she frequently treated the poor and uninsured under the table in the ER. She had a gift for neuro.

She had a brief sexual relationship with Alex Karev. She said she found having sex easier than talking, so it made her less nervous around him.

When she replaced Dr. Ross on Shepherd's service, Derek took a liking to her. He would often try to make her feel confident in her natural ability and talent as a neurosurgeon. He also encouraged and embraced her weirdness.

Heather was a surgical intern at Grey Sloan Memorial Hospital. It was noted by Derek Shepherd that she had a natural talent for neurosurgery and he began to cultivate that talent by mentoring her, though she was not as enthusiastic about it as Shepherd hoped. Brooks, as he pointed out, often acted weird to cover up her lack of confidence in her natural ability, though after Heather finished the surgery on Paul Dawson on her own with full confidence, Derek told her to "stay weird." 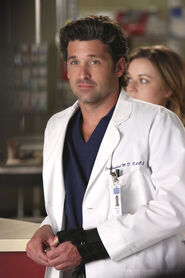 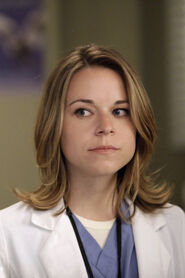 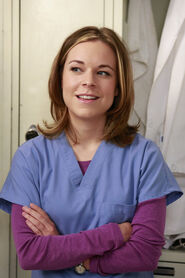 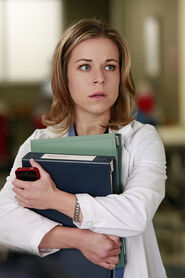 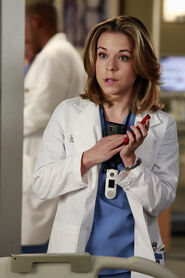 Derek: Brooks, thanks. You've stepped up when I needed it today. I'm proud of you.
Heather: Thank you, sir. Give it up. Slamma Jamma.
Derek: Stay weird, Brooks. (Laughs)

Retrieved from "https://greysanatomy.fandom.com/wiki/Heather_Brooks?oldid=278104"
Community content is available under CC-BY-SA unless otherwise noted.