And Dream of Sheep

Helen Karev is the mother of Alex Karev.

When Alex and his siblings were young, Helen often forgot to feed them. Alex resorted to shoplifting to get food for them, which resulted in him being arrested and sent to juvie. ("Sympathy for the Parents")

Later, while Alex was in high school, he was his mother's primary caregiver, making sure she took her meds and calming her down when her delusions got out of hand. ("Old Scars, Future Hearts")

During her adulthood, she started to become less affected by her schizophrenia, helped by her adherence to a strict routine. She returned to her job at the library. When Alex noticed she'd stopped cashing the checks he sent, he went to visit her, worried something had happened. She told him about what had happened and after some resentment, he told her he was happy for her. He introduced her to Jo and they invited her to the wedding, but she said though she'd love to come, she couldn't deviate from her routine. ("Fight For Your Mind")

Helen surprised Alex when she came to Seattle unexpectedly. Jo found her waiting in the hospital waiting room and took her to Catherine's party, where she was headed. Alex worried when he saw her, believing that she'd had a break from reality. When she started smelling smoke at the party when no one else could, he believed it was the break finally showing, but when it turned out there actually was smoke in the apartment, he finally started to relax and be excited to see his mother. After the building was evacuated, Alex introduced Helen to Meredith. ("We Didn't Start the Fire")

Helen continued to knit during her visit, making baby hats for Alex and Jo's future kids. This started some panic in Jo, who felt pressured by the gesture and started to avoid Alex. Helen admitted to Alex that she meant to nudge Jo a little. ("Blood and Water")

While knitting in the cafeteria, Helen met Bailey, who introduced herself and they started talking about Helen's visit. Helen expressed to Bailey her concerns about going back home. Traveling to Seattle had been a lot for her and she was worried about making the trip back home and getting back into her routine. Bailey relayed those concerns to Alex, who decided to take a few weeks off to take his mom back home and get her settled back in. ("And Dream of Sheep")

A few months later, Alex lied and said she was in need of help and Alex travelled to Iowa. ("Let's All Go to the Bar")

Jo later called her and said she was fine and Alex never came to see her.

She was married to James Evans until they divorced after she was diagnosed with schizophrenia.

She has three kids with her ex-husband, James Evans. Her middle child, Aaron, inherited her mental illness. All three of her children spent time in foster care before being returned to her home.

She works at Kanesville Public Library. 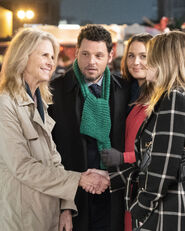 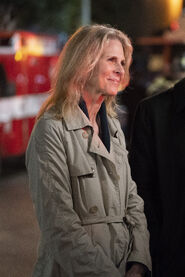 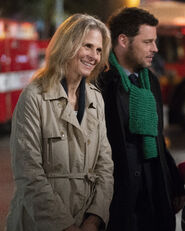 Retrieved from "https://greysanatomy.fandom.com/wiki/Helen_Karev?oldid=304529"
Community content is available under CC-BY-SA unless otherwise noted.