The Hospital Fire is a fire at Grey Sloan Memorial Hospital intentionally set by Stephanie Edwards to save herself and a child.

Alison Goodman was in her car when Keith got in and forced her to drive out into the woods, where he started attempting to rape. Alison, determined not to let that happen, pushed the car and sent them off the cliff. When they arrived at the hospital, they were unconscious and mistaken for lovers. When Keith woke up, he led the doctors to believe that was true instead of correcting them. He asked to see Alison, but as Stephanie was taking him to see her, Stephanie learned that Alison had woken up and told the doctors she had been assaulted by Keith. Keith held Stephanie with a scalpel to her throat and ordered her to lead him out of the building without being seen. She started to take him down to the loading dock, but they were stopped by a lockdown, as staff had realized what had happened. They were trapped with along with Erin Miller, who had wandered away from her parents. Stephanie told Keith that the only way to open the doors would be to call the lockdown off or an emergency that would force release. He had the idea to start a small fire and had Erin help him gather the supplies to do so. He started a fire and held it up to the sprinkler, setting it off. While he was doing this, Stephanie grabbed a bottle of alcohol and sprayed it on him, causing him to catch fire quickly. He then ran toward some oxygen tanks, causing an explosion. ("True Colors")

Stephanie and Erin became trapped by the flames, so Stephanie doused herself in water, wrapped Erin in a blanket, and ran through the fire to save them. She quickly realized the fire had spread to other floors. She took Erin up to the roof, but her key card was gone, so she wrapped Erin in the blanket and sat down next to her. She glanced down and noticed her keycard on the steps below, so she went to retrieve it and took Erin out with her to the roof. She tried to call down for help, but they went unheard. Erin collapsed from blood loss, forcing Stephanie to start CPR, which she continued until the firefighters found them and they were both taken to the ER.

While Stephanie was escaping the flames on the roof, the hospital staff worked with firefighters to evacuate their patients to the parking lot, where they had set up triage. After the fire was extinguished and all patients were evacuated, Stephanie and Erin were both treated for their injuries. ("Ring of Fire")

Stephanie was later taken to a burn unit in Texas to continue treatment of her burns. Due to the damage from the fire, the hospital was also remodeled. ("Break Down the House") 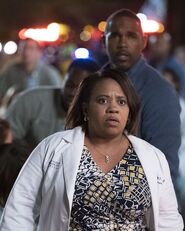 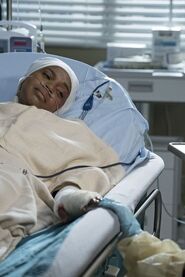 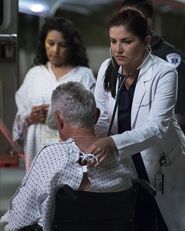 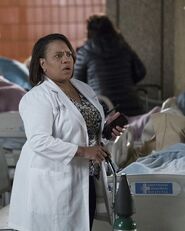