Water floods into an elevator

The hospital flood is a flood that damaged the hospital after a pipe burst.

One morning, while he was supposed to be re-taking his intern exam, George felt a droplet of water fall from the ceiling. After searching for another room to take his test, he decided to postpone it in order to help with the flooding. At the end of the day, he took his exam in an OR gallery.

Then while Alex was moving Jack O'Brien, Mr. O'Brien got up out of his wheelchair and slipped in a puddle. He was taken for a CT to make sure his fall hadn't hurt him. While he was in the CT, water leaking from the ceiling shorted out the machine and left him in the dark. He was then taken into surgery, where the ceiling fell in due to the water. Alex and Erica covered his body as best they could and moved him to another OR, but the water still forced them to explore his abdomen more, which caused them to find a tumor on his pancreas that was only stage I, a rare find.

Janitor Mike told Richard a pipe had burst and they needed to turn off the water to fix it, but Richard demanded they fix it with the water on, as water was required for surgery.

Soon after that, the flooding intensified, leaving all the hallways several inches deep with water. Richard still insisted on keeping the water on and staying open, instead moving the patients to another area of the hospital. However, when the ceiling of an OR fell in on a patient, Richard was forced to close and send their patients out to Mercy West Medical Center and Seattle Presbyterian Hospital. 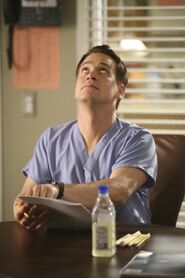 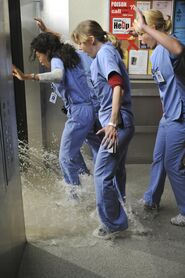 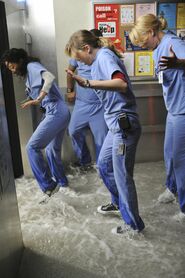