The Hospital Shooting is a rampage Gary Clark initiated after the death of his wife. A total of 18 people were shot and 11 died of their injuries.

Gary Clark first came to the hospital with his wife, Alison, who had cancer. After surgery, she had a stroke, which meant that mechanical ventilation was the only thing keeping her alive. According to her medical directive, she didn't want that, so the machines were turned off despite Gary's objections. ("Sympathy for the Parents")

Gary later decided to sue the hospital, believing they were at fault for his wife's death. ("How Insensitive")

While the lawsuit was still pending, he decided instead to buy a gun and ammo and take them to the hospital to shoot the doctors involved in Alison's death. On his way to the hospital, he was in a minor car accident with Pete. When Pete got out to give Gary his insurance information, Gary shot him. Pete was taken to the hospital, where he was taken into surgery.

Gary then went on to the hospital, where he asked where he could find the Chief of Surgery, but was ignored by several staff members. He then wandered into a supply closet, where he found Reed. He asked her where to find the Chief of Surgery, but when she protested that she wasn't a tour guide and he wasn't supposed to be there, he shot her in the forehead, killing her instantly. Alex then came up behind them and questioned what was happening and Gary shot him in the chest.

As Alex dragged himself to an elevator to get help, April came into the supply closet. She wasn't watching where she was going and slipped in Reed's blood, visibly shaking her. She went to Derek's office and told him what had happened, so he initiated a lockdown.

Gary got on another elevator with Cristina, who finally gave him directions to the Chief's office.

Despite the lockdown, Derek left his office after ordering April to stay put. He went to the OR where Teddy and Owen were working on Pete and called Jackson out to tell him what had happened, also telling him to have them stay in there after they finished until the lockdown was cleared. Shaken, Jackson returned to the table and made an excuse as to why he was shaking.

Gary Clark came through the lobby. When he tried to go up the stairs, Vivian tried to stop him, but he shot her. Mark and Lexie, who were present, checked on her, but she was dead. They then went to an elevator to go somewhere else, and found Alex in there bleeding. They took him to a conference room, where they started treating him.

Outside the hospital, the police had arrived and were blocking all the exits. Richard was also trapped outside and questioned what they were doing about finding the shooter and getting the doctors and patients out. Marty Hancock told him he needed to be patient as they had to clear the hospital one floor at a time.

Meredith and Cristina, who were wandering the hospital, unaware that they were meant to stay in one place, were found by Derek, who pushed them into closet and told them to stay there until he told them it was safe.

Gary shot more people and then entered the room of Mary Portman, who was pretending to be dead at Bailey's instruction. Bailey was hidden under the bed and Charles Percy in the bathroom. When Charles made a noise in the bathroom, Gary found him and after finding out he was a doctor, shot him in the abdomen. He then found Bailey under the bed, but she lied and said she was a nurse and he left the room. Mary assisted Bailey as she started treating Charles.

When Teddy and Owen finished Pete's surgery, they wanted to move him to ICU to warm him up, but Jackson told them about the lockdown and said they needed to stay. Despite this, Teddy and Owen decided to leave the OR and take Pete to the ICU themselves.

Meredith and Cristina stayed in the closet until Cristina saw Gary through the window and informed Meredith that he was looking for Derek, recognizing him as the man who had asked her for directions earlier in the day.

Mark and Lexie continued to treat Alex, but Lexie had to leave to go get blood when they realized Alex needed a transfusion.

Derek eventually ran into Gary himself. Not initially recognizing him, he told him he needed to go somewhere safe. Gary reminded Derek of who he was and said that Derek had hurt him. He then pointed his gun at Derek. Derek tried to talk Gary down, telling him he was a flawed human being who made mistakes. It was starting to work, but then April came out of Derek's office and startled Gary, who then shot Derek in the chest. ("Sanctuary")

After he shot Derek, April rapidly told Gary things about herself and her childhood, saying she was a human being. He decided to let her go. He went back to Derek, but when he saw SWAT coming into the hospital, he left the area.

Teddy and Owen continued to move their patient, but after coming across the dead body of someone who had been shot, they decided they needed to take their patient out of the hospital and called 911.

Mark continued to treat Alex while they waited for Lexie. On her way back to them with supplies, Lexie ran into Gary. She recognized him immediately and figure out what he was doing. He told her he didn't plan to kill this many people, just Derek, Richard ... and her, as she turned off the machines. He aimed for her, but at the same time, SWAT shot him. She quickly left with her supplies.

Gary then made his way to Peds, where he found Arizona and Callie working on Ruby Kendall, whose appendix had burst. Arizona insistently told Gary that there were only children there and covered Ruby's body with her own. Callie stood up and gave Gary bandages, telling him to take them and leave. Once he had gone, Callie called the police to tell them what had happened.

Outside the hospital, Richard learned that Gary Clark was the shooter.

Bailey, with Mary's help, managed to pack Charles' wound, but it didn't hold, so she said they needed to move him to an OR, as it was his own chance. Because he was much larger than the two of them, Bailey came up with a plan to use a sheet to move him.

April, Cristina, and Meredith managed to get Derek into an OR and onto a table, but when they went to get Teddy, Jackson told them she'd left. He then decided to have Cristina do Derek's surgery instead.

Mark and Lexie continued to treat Alex, who was starting to hallucinate. A SWAT team then came in and said they'd be evacuated. They were taken out of the hospital and Alex was taken to Seattle Pres along with Teddy.

Richard, unable to keep standing outside waiting, ran into the hospital to find Gary himself.

Teddy and Owen got Pete outside, but when Owen realized Cristina was still inside, he ran back in to find her.

Bailey and Mary managed to drag Charles to an elevator, but the police had shut down the elevators, leaving them stuck. Bailey then admitted to Charles that he was dying, but said that she and Mary would be with him the whole time so he wouldn't die alone.

Meredith and April sat in the scrub room unable to see into the OR and waited as Cristina operated. Owen came in and they were excited to see him. He went to enter the OR, but when he didn't scrub, they figured out something was wrong. Meredith looked and saw Gary holding the OR at gun point. Gary said he just wanted his justice and told Cristina to stop fixing Derek. Meredith offered herself up instead, citing her personal connection to the three people he wanted to kill. He hesitated when Cristina told him Meredith was pregnant, which gave Owen the opportunity to try to take the gun from him. Owen was then shot himself. Jackson then told Cristina to stop operating. They watched as the monitor flatlined and Gary left. Shortly after he left, Jackson reconnected the leads he'd secretly disconnected and they continued their work as Meredith and April took Owen to the next OR and worked on him.

By the elevator, Charles said it didn't hurt anymore, which he knew was a bad sign. He asked Bailey to find Reed and tell her he loved her and then used his final breath to tell Bailey she was his favorite doctor.

While April and Meredith prepared Owen to remove the bullet from his shoulder, Meredith had a miscarriage, but continued to work.

Richard found Gary in the ICU. Gary said his problem was that he didn't have enough ammo left. He had left some at home because he thought he'd want his flask, but the only reason he needed his flask was because he only had one bullet left. He planned to shoot Richard and then himself, but he had to choose one or the other. He offered his flask to Richard, who dumped it out and told Gary he had a choice to make. He could choose to shoot Richard and spend the rest of his life in prison or he could shoot himself and spend an afterlife with his wife. He shot himself just before SWAT arrived.

Cristina was able to save Derek and Teddy was able to save Alex. Outside the hospital, Mary was reunited with her husband, Bill, and Bailey was told Reed died in the shooting. Once evacuated, Ruby was moved to another hospital with her parents. ("Death and All His Friends")

As a result of the shooting, all the doctors had to be evaluated by a therapist before they were allowed to return to work. ("With You I'm Born Again") 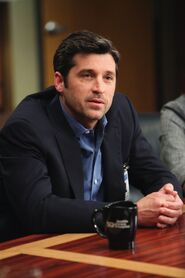 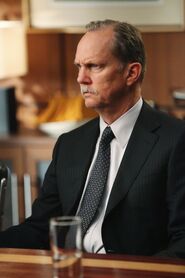 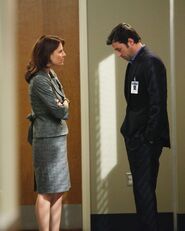 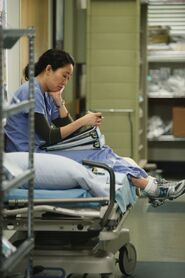 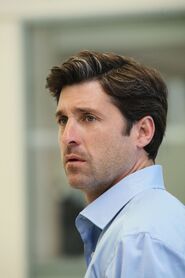 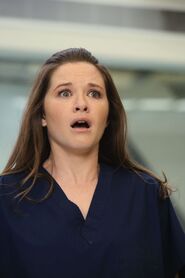 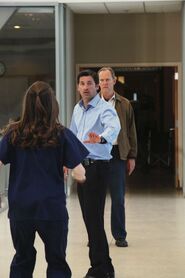 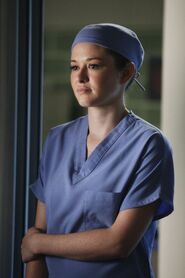 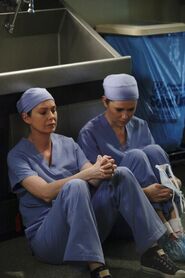 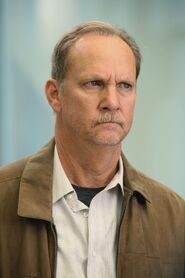 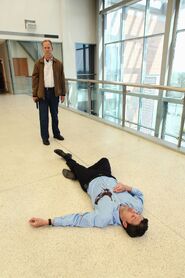 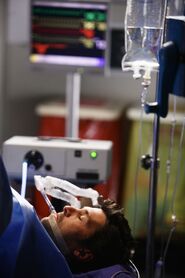 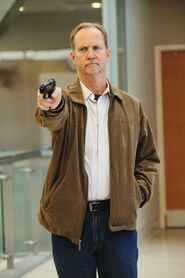