On his first day as a surgical intern, Isaac was assigned to Stephanie Edwards. When a tunnel collapsed, they rushed to help her while she tended to Joan Paulson. He also at one point took blood samples to the lab while eating food from the rescheduled reception of Richard Webber and Catherine Avery. ("Time Stops")

When the doctors realized that they had a very short window to get Keith Gardner to an OR after removing him from his car, Isaac, along with the other interns, was posted along the path to keep it clear for them. He rounded out his first day by rounding on a stable, post-op Joan and getting the opportunity to ask Stephanie questions. ("You're My Home")

While the doctors were operating on Aliyah, Amelia pointed out that Meredith was mad about the wall. Isaac asked what wall, but he was quickly silenced and told just to stand there. ("Sledgehammer")

When Jade Bell came into the ER with a head laceration, Isaac wanted to discharge her after stitching it up. However, she was later admitted to the hospital with a pituitary tumor. ("Walking Tall")

Seeing that the interns weren't well-trained in delivering bad news to patient families, Owen Hunt insisted that they all be trained. He taught them the four Ls (Location, language, body language, and leave) and informed them that they'd be telling the families of the people who died in the ER that day. ("Old Time Rock and Roll")

Not wanting to go out to get it herself, Jo Wilson called Issac from the party to get him to go to the store and buy cheese for the party. He showed up with the cheese and Jo tried to dismiss him, but Arizona invited him to sit with them, so he pulled up a toy rocking horse and joined them at the table. ("Guess Who's Coming to Dinner")

While working on the case of Maya Roberts, Isaac, along with Alex, was fired by Maya. He wondered how that worked and if it would go on his permanent record. ("All I Want is You")

Isaac worked on the procurement side of Kelsey's transplant surgery. ("I Am Not Waiting Anymore")

During the Code Pink, Isaac found himself unable to get through a door as he expected. He later went through the door when Alex opened it with a security guard's badge. ("There's a Fine, Fine Line")

When Andrew was badly beaten by Alex, Isaac met the ambulance and treated Andrew in the ER. ("Undo")

Isaac scrubbed in to assist Ben on a kidney retrieval. When the kidney was removed, the remaining kidney died and Ben and Isaac kept her stable while they tried to figure out if the kidney would be given back to her or transplanted as intended. While they worked, they talked about what they'd do. Ben believed Cynthia would want the kidney to go to her son, but Isaac said with only one kidney, she might want to keep it, as that's what he'd want to do. ("Back Where You Belong")

Isaac lay in a bed in the ER when he had abdominal pain. Stephanie didn't take his concern seriously and believed he had nothing. However, he insisted she treat him, so she did a CT, which showed diverticulitis. April, Stephanie, and Andrew took him into surgery, where April discovered abdominal tuberculosis. The OR was quarantined and after April finished his surgery, Isaac was put in isolation to recover. ("What's Inside")

During the fire that covered two floors of the hospital, Isaac and Ben carried one patient at a time down the four flights of stairs to evacuate them. ("Ring of Fire")

Isaac developed a crush on Jo and began flirting with her, offering to wait with her for lab samples and becoming excited when she tried to stop Stephanie from taking him to prep a patient for surgery. However, she was completely oblivious to his advances. ("Walking Tall")

Isaac is a surgical intern at Grey Sloan Memorial Hospital. He joined the program for the 2016-2017 residency year, and was assigned to Stephanie Edwards. 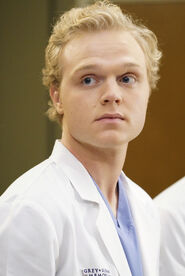 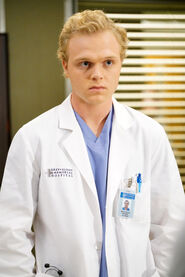 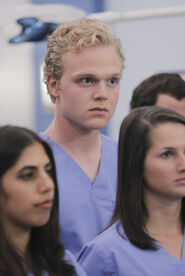 Retrieved from "https://greysanatomy.fandom.com/wiki/Isaac_Cross?oldid=327017"
Community content is available under CC-BY-SA unless otherwise noted.