Puttin' on the Ritz

James and two of his friends got high and crashed their car into a tree. They were the only ones injured in the crash and were taken to the hospital. James had no ID on him, so they called him Jake Doe. He had endocarditis due to his heroin use, which they treated. He also had his tricuspid valve replaced. ("Puttin' on the Ritz")

James stayed in the hospital after his surgery to recover. He had to pass a treadmill test in order to be released from the hospital. While he was doing the test, Jo mentioned the possibility of rehab, but he rejected the idea, saying he was just a recreational user. She called him out on the lying, but he said he couldn't afford the good places. Despite his reassurance that he was fine, Jo went to him and said she got him a bed in a great program. He questioned her motives and rejected her offer. He was discharged and left the hospital. ("I Bet It Stung")

Being Followed by Alex[]

When Alex found out where James and his band were playing, he went to that venue every night. One night, after they finished playing, James came and sat down next to Alex, who offered to pay for his drink. James said he recognized Alex, though Alex tried to brush it off as him being at the shows. James then said he remembered him. He's a doctor from the hospital. He said he met a pediatric surgeon on the scariest night of his life, when his son choked on a strawberry. Alex asked where his family was, but James said it's complicated. He then invited Alex to jam.

They started playing and singing together. James stopped the session to show Alex a picture of his son. Alex was shocked not to see himself, but Nicky, a son he had with another woman named Naomi after leaving Alex's mom. James said that he hadn't seen them in years because he left them, just like he left Alex's mom. Alex became angry that he not only left his family, but his second family as well. Alex said they were better off without James and then he punched James and left the bar. ("Map of You")

Return to the Hospital[]

James came back to the hospital, where he requested to see Jo. Jo tried to send him away, but he said he was trying to get clean and then he collapsed on the floor. He was moved to the ER, where Owen gave a treatment plan. When he tried to include methadone, Jimmy refused, saying he wanted to get totally clean.

When Alex visited his hospital room, Jimmy said he'd recognized Alex as soon as he saw him standing over him at the bar. He left the bar and tried to get clean. As he continued to go through withdrawal, he had hallucinations, mostly of Alex's childhood. During one of his hallucinations, he pushed Jo against the wall and had to be restrained. ("Man on the Moon")

When James developed mitral regurgitation, Shane took him into surgery with only Leah to help him. Things went south quickly, but Shane refused to call anyone for help. When Leah figured out that Shane wasn't going to stop and Jimmy could die, she ran to get help. She brought back Webber, who managed to get Shane to step back and took over. ("Get Up, Stand Up")

Three weeks after his surgery, Jimmy was still alive, but struggling. Alex called Naomi and told her Jimmy had died in order to get her to come visit. She came, but was angry to learn Jimmy was still alive. She took the guitar he'd stolen from her and left. Jimmy woke up afterward and saw the guitar missing. He told Alex taking it was one of the lowest things he'd done and he wanted to give it back, not knowing Naomi had come and taken it. When Jimmy started to struggle to breathe, Alex lied to Jimmy and told him Naomi and Nicky were on their way. He said he'd told them Jimmy loved them. He assured him it was okay, that he could go. A few moments later, Jimmy died. ("Take It Back")

James was married to Helen Karev. They had three children together, but divorced because of his drug use and her mental health issues.

He later married Naomi Evans. They had one child together. He then left, but they never legally divorced.

James had three children with his first wife: Alex, Aaron, and Amber. Though James did drugs, he did have a good relationship with Alex as a child, as he could remember a time he and his oldest son Alex went to a fair with hazardous rides, but they rode each one twice. When Alex grew up, and his father would abuse his mother, he became a wrestler and beat James near to death. After that, James abandoned them.

Sometime later on, he had another son, Nicky Evans with another woman, but he abandoned them, too, when Nicky was five.

When he came to Grey Sloan Memorial Hospital, Alex initially recognized him because of the way James called him Sinatra. He had Jo run a DNA test, which confirmed his suspicions. ("Puttin' on the Ritz") Alex followed him to a bar, where James and his band played for a couple nights. James talked a little bit about his son, and Alex thought he was talking about himself, but when James showed him a picture of the kid, Alex realized it was Nicky, the child James had with his second wife, whom he later left. Alex becomes enraged and punches him in the face, telling him to never talk to the kid, that he was better off without Jimmy. ("Map of You")

When James later returned to the hospital, he started bragging about Alex, telling all the nurses Alex was his son. Alex confronted him about not remembering his own child, but Jimmy said he remembered him. He shared memories with Alex and said he left things better with Naomi and Nicky and might be able to go back. Alex made his peace with Jimmy, saying he was better off without Jimmy, but wished him luck patching things up with Nicky. ("Get Up, Stand Up")

Jo was his doctor when he arrived at Grey Sloan Memorial Hospital and she fought hard for him to try to get his life back together, and tried to get him into a home, but he rejected the offer. He later tried to get clean and she admitted him to help with his withdrawal symptoms.

James was a not very successful musician. He traveled through the United States with his band, mostly playing in bars. 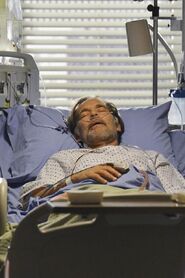