GA: Beat Your Heart Out

Jen Harmon was a woman with an aneurysm she called "a ticking time bomb in her head."

Jen accidentally ran over her husband, Rob, with a car. She blamed her pregnancy for leaving the car in drive. His shoulder was dislocated and he had burns from the road. His injuries were treated in surgery. ("Beat Your Heart Out")

Upon arriving at the hospital with Rob, Jen collapsed. She had a normal neuro exam, but her blood pressure was elevated, so they struggled to get it back down before it started affecting the baby. Her husband told the doctors that eating calms her down and she likes cheeseburgers, so they got her one to try to keep her blood pressure down. Jen started panicking again when Lexie said that Rob's surgery was taking longer than expected, but after Lexie's calmed her, it went way down and Jen had a seizure. An MRI then revealed an aneurysm, for which they scheduled surgery. ("Beat Your Heart Out")

Her surgery was scheduled for the next morning, but it was pushed back so he could treat Archer Montgomery. Jen became increasingly nervous as she waited for her surgery. Alex Karev tried to calm her down by showing her her son's face and having her focus on that. At the end of the day, Derek told her her surgery was scheduled for the first thing the next morning. She begged him not to make her wait another night, so he took her into surgery that night. In surgery, there was unexpected bleeding, but they were able to stop it and Derek clipped the aneurysm. Shortly after her surgery, Jen became unstable again and Derek was called back to the hospital. ("Before and After")

When he arrived back at the hospital, he found Jen with difficulty breathing. He then consulted with Addison on the case. Addison suggested that the baby could be the problem. They did a doppler and found that the baby was anemic and Jen was mirroring. After running more tests, which showed that the baby was in heart failure, Addison said it was likely due to the blood Jen had gotten during her first surgery being incompatible with the baby. Addison said ideally, she'd do an in utero blood transfusion, but this wasn't ideal. She instead suggested delivering the baby to save Jen's life. Jen declined and said she wanted to wait two weeks to give him a better chance. They asked for another option, so Derek mentioned the transfusion, despite Addison saying it was too risky. Jen insisted that she wanted it. Addison did the transfusion successfully. ("Ex-Life")

Jen was stable after her surgery, but unable to speak clearly due to blood flow issues, Derek stayed by her bedside for several hours, guilty for having nicked the aneurysm in her first surgery. Derek took her into surgery for a EC-IC Bypass to stop the mini-strokes she was having. Addison came into the surgery to monitor the baby throughout. In surgery, Jen and the baby became unstable. Addison wanted to deliver the baby, but Derek asked her to wait. He stabilized Jen just before she made the incision to deliver. After her surgery, the aphasia had cleared, but she had developed pre-eclampsia. Later, her patch blew and she had to be taken back into surgery. Derek made the radical decision to remove her temporal lobe. When the bleeding spread into her frontal lobe, he decided to remove that as well. Addison objected and eventually had to call in The Chief to get Derek to back down and allow Addison to deliver the baby. Addison did the c-section and Jen was pronounced dead shortly after. ("An Honest Mistake")

Derek was later deposed for a lawsuit because of Jen's death. ("I Will Follow You Into the Dark")

She was married to Rob Harmon until her death. He proposed to her in a supermarket aisle because that's the first place he saw her. ("Beat Your Heart Out")

Jen loved her husband very much, she felt guilty for running him over with their car.

In her final surgery, her son was delivered. Because of the steroids and the three additional days that had passed, they believed he had a good chance to survive. ("An Honest Mistake") 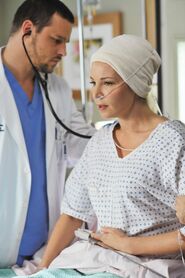 Retrieved from "https://greysanatomy.fandom.com/wiki/Jen_Harmon?oldid=269955"
Community content is available under CC-BY-SA unless otherwise noted.