Jo and Alex are married

Jo and Alex's Wedding is the wedding between Jo Wilson and Alex Karev.

After quite some time together, Jo proposed to Alex, saying she'd never fit in anywhere before, but she fit in with Alex. ("Old Scars, Future Hearts")

During their engagement, Jo told Alex that she'd never shared a last name with anyone who loved her, so she wanted to take his last name when they got married. ("Beautiful Dreamer")

While trying to plan the wedding, Alex and Jo realized they didn't know much about the process, so April offered to plan the wedding for them, if they gave her a date and a budget. They took her up on her offer and she began to plan. ("Bad Reputation")

April finished planning the wedding and sent out the invitations. ("Cold as Ice")

On the day of the wedding, Alex and Jo arrived at the location to find that the caterers had gone to the wrong location. When the guests didn't start arriving, they became suspicion. Then April learned that the GPS link on the wedding website had sent them all to the wrong wedding. When they realized, they had to sneak out of that wedding and make their way to the actual wedding.

The officiant was also delayed at arriving, so they used food to keep the guests happy. When Kirsten, the wedding planner, accidentally ate shrimp, she informed them she was allergic just before she passed out. The doctors were able to stop the emergency, but they knew they couldn't finish the wedding that day, so they all took the ferry back to the mainland. On their way back, Meredith learned that she could become ordained with the click of a button. She did so and then she officiated their wedding on the ferry. ("All of Me") 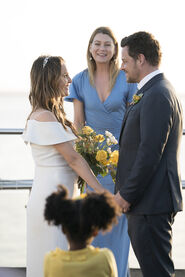 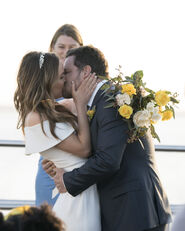 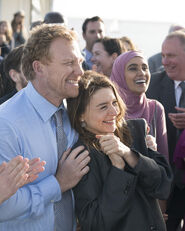