GA: Save the Last Dance for Me

S19: House Where Nobody Lives

Joey Phillips is a homeless child who was injured while looking for a safe place to sleep.

Joey was injured while searching an empty warehouse for a warm place for him and siblings to sleep. He told them not to go for help, fearing that they'd be split up, but Sarah believed he was dying and showed Jack where Joey was. When they said Joey needed to go to the hospital, Joey objected, but when he became unresponsive, they took him anyway. They told his siblings where the hospital was and said they could run and meet the ambulance there. ("House Where Nobody Lives")

Joey became agitated when he learned that his siblings had been taken back into foster care. He tried to leave the hospital, but Jo caught him and told him explicitly what could happen if he tried to leave before he got treatment in order to convince him to stay. He later had surgery on his arm. ("Save the Last Dance for Me")

After his surgery, Joey was reluctant to do his PT. Cormac initially thought he was bored by it, so he brought in a video game that used the same motions and said he could play that instead. He told them he couldn't play video games or enjoy being safe and warm without knowing his siblings were okay, too. Bailey then made some calls and arranged for his siblings to come to the hospital for pizza and video games, which reassured him greatly. ("A Diagnosis")

After his parents died in a car accident when he was five, he ended up in foster care, in a house with Frank, Sarah, and Ernie. When their foster father was arrested, they ran away together and started living on the streets. They were split up again when Joey was hospitalized and social services was called for the other three. ("Save the Last Dance for Me") 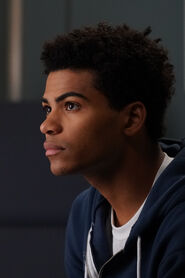 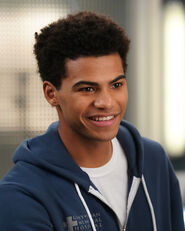 Retrieved from "https://greysanatomy.fandom.com/wiki/Joey_Phillips?oldid=303615"
Community content is available under CC-BY-SA unless otherwise noted.