Put Me In, Coach

Julia Canner is an ophthalmologist from Seattle Presbyterian Hospital. She dated Mark Sloan until he broke up with her following the plane crash.

During the softball game between Seattle Grace and Seattle Presbyterian, Julia good-naturedly ribbed Mark and the entire SGMW team. While she was jeering Lexie's pitching, saying her grandma can throw better than she can, Lexie threw a softball at her, showing that she was jealous of Mark and Julia's relationship. ("Put Me In, Coach")

Julia was called to SGMW to operate on Abby Anderson, who had a shard of glass impaling her eye. After the surgery, which was successful, she confessed to Lexie that she was nervous to be in there, being around Mark's friends and Lexie. ("Suddenly")

When Julia had her FSH levels tested and they indicated that time was of the essence if she wanted to have kids, she went to Mark with the idea. He was shocked and she told him to think about it. ("Let the Bad Times Roll")

When Mark was in a plane crash, Julia went to Boise, but because she wasn't family, they wouldn't let her see Mark. When he arrived back in Seattle, she came to the hospital and said she loved him, but he replied that he loved Lexie, who had died out in the woods, and ended things with Julia. ("Remember the Time")

Julia dated Mark Sloan for several months. They also discussed having a child together. ("Let the Bad Times Roll") However, before that could happen, Mark was in a plane crash. When she visited him in the hospital after the crash, he broke up with her saying that he loved Lexie. ("Remember the Time")

Julia was unaware of Lexie's initial dislike of her. As Mark Sloan's new girlfriend, Lexie was jealous of their new relationship, which resulted in Dr. Canner incurring a breast-related injury from Lexie's fastball. After Dr. Canner consulted on a case with Lexie, her surgical skill and personality inadvertently changed Lexie's attitude toward her.

Julia was very aware of Derek's reputation as a world-renowned neurosurgeon and was nervous to be performing a surgery with him. Initially, Derek did not share the same enthusiasm working with Dr. Canner as he misjudged her as lacking skill due to her relationship with Mark Sloan. However, after she assessed that the patient's eye could be saved during pre-op and successfully repaired the eye during surgery, Derek developed a new found respect for her.

At the request of her boyfriend at the time, plastics head Dr. Mark Sloan, Dr. Canner consulted on a case at Seattle Grace Mercy West Hospital that required the skills of a retinal-vitreous surgeon.

Despite Dr. Derek Shepherd's reservations, Dr. Canner was granted privileges and successfully performed her part of the surgery that resulted in the recovery of the patient's eye. 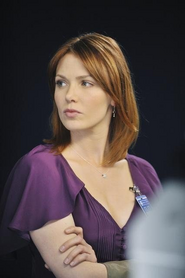 Retrieved from "https://greysanatomy.fandom.com/wiki/Julia_Canner?oldid=269856"
Community content is available under CC-BY-SA unless otherwise noted.